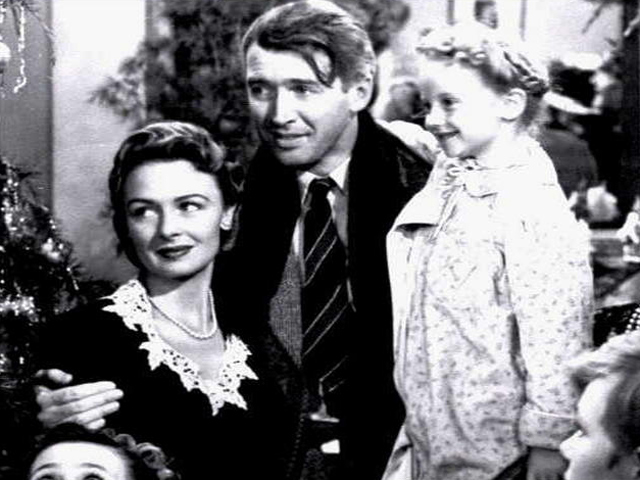 LOS ANGELES - George Bailey can rest easy. He really did make a difference in the lives of people, including all 3.8 million in Los Angeles.

Bailey, for the one or two people who still haven't seen the classic Frank Capra film "It's A Wonderful Life," is a man driven to the brink of suicide when he comes to believe his life never really mattered.

It's up to his quirky guardian angel Clarence to set him straight by showing Bailey, played by Jimmy Stewart, what the world would have been like without him.

In honor of the film's 65th anniversary, the City Council declared Friday "It's A Wonderful Life Day" in Los Angeles.

To get people in the spirit, Councilman Tom LaBonge, several members of Capra's family and a few others gathered at the director's star on the Hollywood Walk of Fame on a sunny holiday morning.

The section of the walk, it turns out, is one filled with cheesy souvenir shops and sex toy emporiums. They give it more the look of Pottersville, the disreputable place in the film that the evil banker Mr. Potter turns bucolic Bedford Falls into when Bailey isn't there to stop him.

As one of the last surviving cast members, the 70-year-old actor-producer said he considers it an honor to introduce new audiences to the movie.

When it debuted in theaters in 1946, "It's A Wonderful Life" was actually a commercial and critical flop. But if that bothered Capra, he never let it show.

The film, whose story takes place at Christmas, became a holiday classic with the dawn of television, when families began to gather each holiday season to watch it.

"It carried with it the message that you can find in each of my dad's films. The message of hope," Capra said. "Maybe like George Bailey, we should pause for a brief moment and examine our lives and see if we can make a difference as long as we never give up."