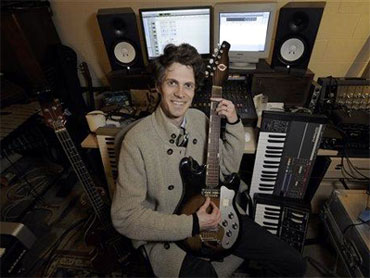 In an instrument-filled garage almost every day for the past year, musician John Wood has tried to find a new way to make a living.

Wood and a bunch of other artists use the soundproofed space with an extra-high ceiling to create a new album every month. It's a staggering feat when you consider it means recording a new song every three days. And then they essentially give it away for free.

Wood is at the vanguard of how musicians are negotiating pay in a world overrun with free music online. He distributes his music to anyone who wants to download it, copy it or share it with other people. He then asks for donations or subscriptions to CDs that he sends in the mail.

Many artists have tinkered with mostly or completely free online album releases, such as Radiohead and Trent Reznor's Nine Inch Nails. They've instead aimed to make money on sales of souped-up deluxe CD sets or concert tickets.

But musicians like Wood, who don't have a huge fan base, are unlikely to make it by filling arenas and selling high-priced goods. And as regular CD sales continue to fall and major recording labels pare their artist rosters, up-and-coming musicians have to find ways to promote themselves in ways that were unheard of a few years ago.

Wood's album-a-month plan, along with a written blog explaining his inspirations, is designed to spur interest and build loyalty among fans. He hopes that one day some real money can be made from it as well.

"Obviously that would be a great side of it and that's something we're aiming towards," Wood says, sitting by a mixing board surrounded by guitars and keyboards on a Friday afternoon. "To me, this whole project is really just about music and art and creativity."

Wood, 28, was trained as a jazz pianist and works with a rotating cadre of musicians to produce songs in wildly different genres. He has churned out Bach-inspired keyboard-only studies and snappy R&B tunes that would have no problem on commercial radio. One album, in December, was based entirely on the only three-way tie in the history of the quiz show "Jeopardy!" - which was made possible by the sportsmanship showed by the returning champion.

These monthly releases can be heard on a blog Wood writes called "Learning Music Monthly," which feels more like a magazine than a CD. Wood calls himself the editor-in-chief, and the site shows original art and sometimes sheet music. Listeners can also sometimes hear isolated recordings of each instrument or vocal in a particular song.

So far, Wood has gotten about 100 fans to donate anywhere from a penny to tens of dollars to the project. Some have paid $59 a year for a monthly CD in the mail. As a one-time bonus, he wrote a personal song to each subscriber on his or her birthday and sent that in the mail, too.

"That made it worth the subscription right there," says Jeremy Zitter, a friend and subscriber.

Starting May 1 Wood plans to increase the subscriber fee to $70 for a year or $40 for six months. And his group also asks for small cover charges, sometimes around $5, for live performances.

Drummer Corey Fogel, who sometimes plays with Wood, says these varied methods of selling songs challenge consumers to ask themselves what they think the music is worth and can form a tighter connection between musicians and their fans.

"It alters your perception of consumerism," Fogel says. "It's a bigger risk in some ways, but the payoff can be better."

Still, the revenue does not amount to much, especially for work that often finds Wood in his garage 10 hours to 12 hours a day. Wood, Fogel and other musicians in their group augment their income by playing in other bands, teaching music or through catering jobs. The album-of-the-month idea is very much a business model in progress.

Wood's independent record label, called Vosotros: Music for You-All, has made it a mission to develop ways for musicians to make money beyond the traditional sales format.

In the past, big record labels paid musicians large advances and then shouldered costs of recording and promoting albums. As song sales rolled in, the labels would recoup their investment.

With song sales slowing, largely due to piracy, the system of big advances is crumbling.

And because free songs are so widely available, Vosotros' president, John Gillilan, said musicians' main battle is now just to get noticed.

"If someone downloads one of these albums for free and puts it on their iPod and enjoys it, that's victory," says Gillilan, 24. "There's so much content out there, that for someone to care enough to seek it out and to listen to it, long term, that person is going to be a fan. They're going to come back, they're going to want more. That's really the strategy behind it."

Eric Garland, the chief executive of online music tracking firm BigChampagne Media Measurement, said innovative ways of making money from music are essential because for every song sold, eight are downloaded for free. Even though Apple's iTunes sells an estimated $1 billion in songs annually, an amount that grows every year, it hasn't been enough to cover the steady decline in CD sales.

"Unless the recorded music industry can find a different way to get us to open our wallets, the iTunes model alone will not carry the day," Garland says.

Wood's marathon songwriting efforts are paying off in another way. After 24 albums in two years, his collection has hundreds of songs. Some have attracted the attention of television producers interested in using his music in their shows.

In February, MTV put an instrumental version of a song called "Contagious" in an episode of "Real World: Washington D.C." The deal should bring Wood a few hundred dollars, depending on how many times the episode is rerun.

Another twist is that Wood releases his music under a "Creative Commons" license rather than relying on traditional copyrights. The rules can help artists mix free giveaways with real business plans. Eric Steuer, creative director for Creative Commons, applauded Wood's multifaceted approach to making money.

"It's not that there's THE new model," Steuer says. "There's a million different ways to do it now."