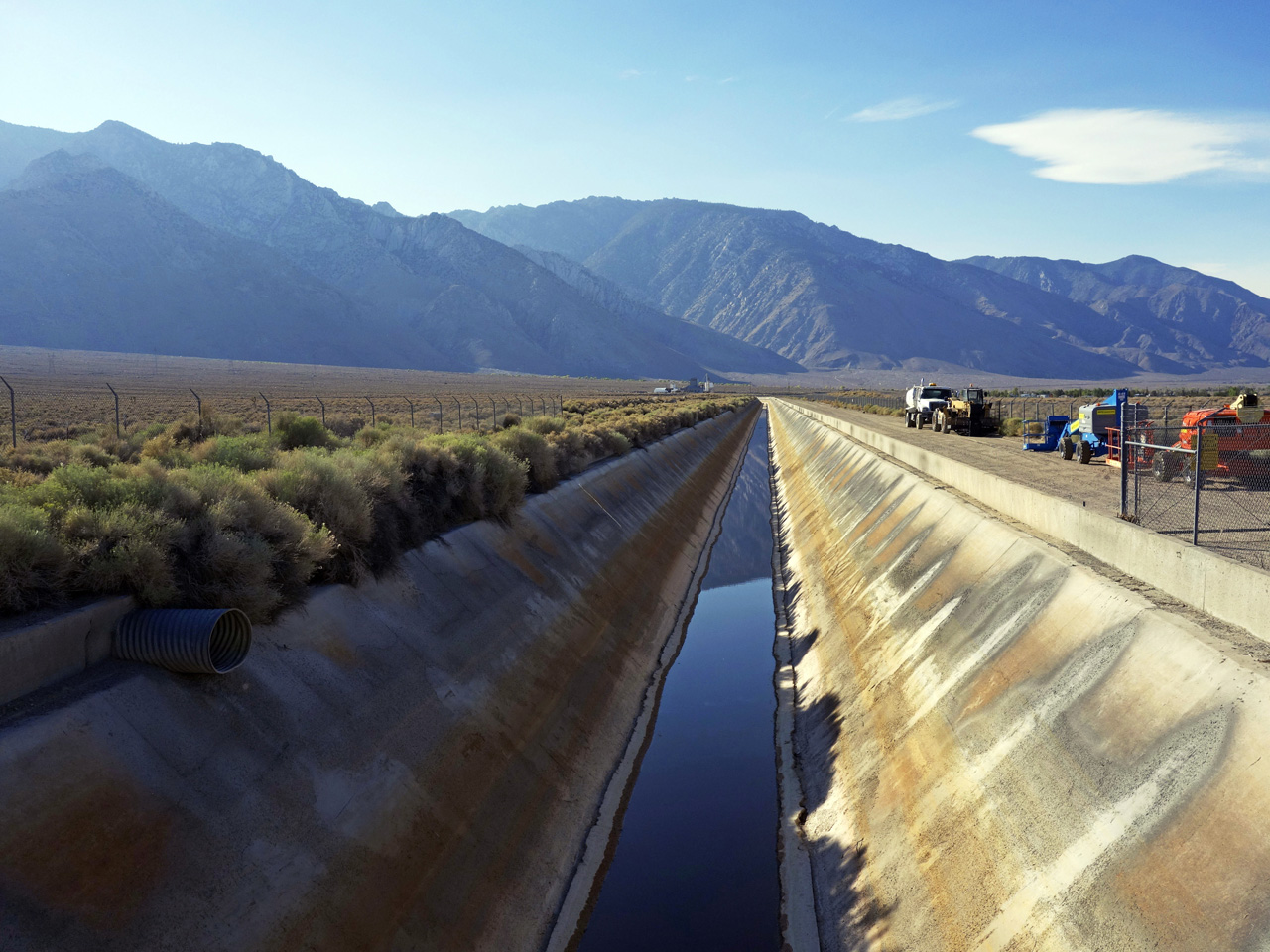 OLANCHA, Calif. -- Water in the aqueduct that helped fuel Los Angeles' growth was flowing toward the city Wednesday for the first time in six months after workers removed an earthen and concrete dam that had diverted runoff to the parched Owens Valley.

With little mountain runoff due to a historic drought, water managers made the unprecedented decision to try to meet legal obligations to keep the Owens River flowing, control dust from a dry lake bed and irrigate pastures where cattle graze instead of sending water to the city.

For those in the Owens Valley, who have a history of conflict with the metropolis hundreds of miles to the south, the plugged-up aqueduct brought relief to some and left others to suffer the drought's misery.

Cattleman Mark Lacey got a taste of both.

In the southern end of the valley this summer where the Department of Water and Power mostly fulfilled irrigation contracts, Lacey's cattle grazed amid an oasis as cool, clear water poured onto verdant fields framed by barbed wire.

Lacey had to lay off some ranch hands and he trucked a third of his cattle to Nebraska and sent another third to greener pastures in Nevada and Oregon.

Like others in California's massive agriculture industry, Owens Valley ranchers are subject to complex water rights and largely dependent on snowmelt from the Sierra Nevada that looms nearby.

Unlike most farmers, though, they are also at the mercy of Los Angeles, which looms even larger. LA owns most of the water rights it furtively bought in the early 1900s in a widely chronicled land grab loosely recounted in the movie "Chinatown."

William Mulholland conceived the gravity-fed channel to slake the growing city's thirst and famously quipped, "There it is. Take it," as water first flowed into LA 102 years ago.

There was no such declaration Tuesday as workers used an excavator to begin dismantling the temporary dam.

The aqueduct's contribution to Los Angeles has diminished over time, given legal fights over the environment and greater reliance on the California Water Project and the Colorado River.

The 338-mile aqueduct system typically provides about a third of the city's water, it but it can supply a larger share after a wet and snowy winter, which forecasters are predicting in the months ahead because of El Nino.

The aqueduct will only account for about three percent of this year's water because of the drought, said aqueduct manager Jim Yannotta. The flow is being restored because irrigation season is over and legal obligations in the Owens Valley have expired for the year.

The relationship between the locals and the "the city," as LA is called in this rural patch of high desert, has been fraught with conflict that intensified this spring when the Department of Water and Power announced that the historic low snow levels would force it to shut off irrigation water.

"There's a little bit of animosity toward DWP that wasn't there a few years ago," Lacey said. "When you get desperate times, it creates heightened tension."

Ranchers had agreed to take less water, but DWP rejected that compromise.

The department later reversed its initial position and said it would not send water to LA, but would use the dam to keep runoff in the Owens Valley.

DWP is required by court settlements to provide water to the Owens River and dampen the desiccated Owens Lake to control unhealthy dust that has blown since its waters were siphoned south.

Air quality regulators and environmental groups agreed to take less water from DWP for dust control and habitat protection so ranchers in Inyo County could water their pastures. Ranchers in Mono County, however, lost out because there's no legal settlement protecting their water supply.

Nathan Reade, the agriculture commissioner for Inyo and Mono counties, said shutting off the spigot to everyone would have devastated the local industry.

Farm production from the two counties barely registers a blip in the state's overall farm economy, but ranching has long been a way of life in a place that provided a backdrop for westerns starring Roy Rogers, John Wayne and Gary Cooper, and featuring the pluck of the Lone Ranger and Hopalong Cassidy.

Cattle forage on the valley floor in winter and chomp on irrigated pasture in summer. Some ranchers drive their cattle up to federal land in the mountains in summer, which is how Scott Kemp managed to keep much of his herd nourished despite water cutbacks.

The state's drought had already forced farmers to cut herd sizes. Reade estimated livestock has been reduced 40 percent to 50 percent in recent years.

Unlike row and tree crops, livestock is mobile.

Gary Giacomini, who lost most of his grazing land in Mono County when the DWP said he couldn't divert water from nearby streams, paid another rancher to let his cattle graze.

Even after reducing herd sizes significantly, ranchers have been helped by high beef prices.

Giacomini said the predicament reminded him of one of his father-in-law's sayings.

"His dad told him, 'God never intended us to have a good market and good feed at the same time,'" he said. "I guess that premise has held through the generations."

Weather officials are predicting that California's drought could be eased by an especially long-lasting El Nino. The weather phenomenon which drives weather systems in the Pacific Ocean could drive rain to the parched state long after winter, but some say it will take years of record-breaking rain to restore water to pre-drought conditions.