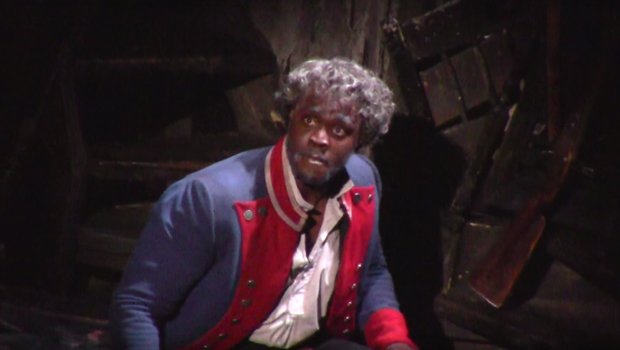 NEW YORK -- Kyle Jean-Baptiste, the first African-American and youngest person to ever play the role of Jean Valjean in "Les Misérables" on Broadway has died after falling from a fire escape, according to a show spokesman. He was 21.

"The entire 'Les Misérables' family is shocked and devastated by the sudden and tragic loss of Kyle, a remarkable young talent and tremendous person who made magic -- and history -- in his Broadway debut. We send our deepest condolences to his family and ask that you respect their privacy in this unimaginably difficult time," a statement from the production reads.

The actor was an ensemble member of the company and an understudy for Valjean, going onstage as the ex-convict in a history-making appearance July 23. His last performance in the role was Thursday.

The Broadway community took to Twitter on Saturday to mourn the loss of a young talent.

"Shocked and saddened to have lost one of Broadway's youngest treasures," tweeted Tony Award-nominee Joshua Henry. Former "Glee" star Matthew Morrison, starring in "Finding Neverland," called him "such a pure voice. Heartbreaking." Patina Miller, a Tony winner for "Pippin," said: "My heart goes out to all who knew and loved this incredibly talented young man."

Jean-Baptiste was set to appear later this year with Jennifer Hudson in the Broadway production of "The Color Purple," his agent told CBS New York.

According to police, Jean-Baptiste was sitting on a fourth-floor fire escape of an apartment in the Bedford-Stuyvesant neighborhood of Brooklyn with a 23-year-old woman Friday night when he stood up, slipped and then fell backward to the ground.

The city's medical examiner will determine his official cause of death, police said. A spokeswoman for the medical examiner's office did not immediately respond to a message seeking comment late Saturday.

Jean-Baptiste was born in New York and graduated from Baldwin Wallace University. The 6-foot-2-inch tenor had recently landed two musical roles at Playhouse Square in Cleveland -- in "Murder Ballad" and "Love Story." He also had played Enjolras last year in a production of "Les Misérables" at the Idaho Shakespeare Festival.

After making stage history as the first black Valjean, he told Playbill: "I did not immediately think of it as making history. This was my dream since I was a little boy. This incredible team of creatives presented an opportunity to play a part I have dreamed of playing since I was introduced to theatre, and I am forever grateful. I felt a huge amount of responsibility to do right by them and to honor this iconic material."

In one of his last tweets, sent Tuesday, Jean-Baptiste showed gratitude for his friends and fans: "I thank everyone who supported me and still does. I will never forget this experience. Onwards and upwards," he wrote. "Nothing but love."

The current "Les Misérables" on Broadway is the second revival of the hit show. It debuted in 1987 with Colm Wilkinson in the role of Valjean and lasted until 2003. A revival in 2006 lasted just a few years and the latest reimagined version landed on Broadway last year. In a few days, British opera star Alfie Boe is due to take over Valjean.