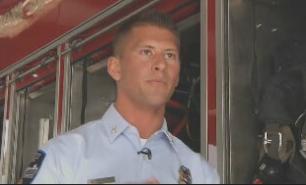 SCOTTSDALE, Ariz. -- Authorities say a man has been arrested in the slaying of an off-duty Tempe Fire Department captain. Scottsdale police say 21-year-old Hezron Parks is being held on the charge of second-degree murder.

Police say Brayer was riding on the back of a golf cart with several other people in Scottsdale when a man driving in a red Scion coupe began driving closely and bumping the rear end of the cart, CBS affiliate KPHO reports.

They say Brayer got out of the cart and approached the driver and was shot in the head.

The suspect then sped away from the scene, striking numerous other cars in the process.

Brayer was pronounced dead at a hospital.