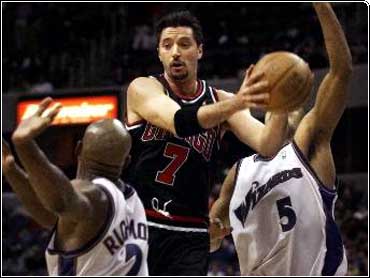 Before setting off on what he hopes is another championship mission, Toni Kukoc recounted the paper trail behind the blockbuster deal that sent him to Philadelphia.

The way Kukoc told the story Thursday, it sounded like a lesson to Chicago Bulls coach Tim Floyd: Don't put trade possibilities down on paper, and don't let the paper fall on the floor.

In his first public appearance since being traded to the Philadelphia 76ers, Kukoc acknowledged that he did find a piece of paper outlining his trade possibilities a few weeks ago.

"That was actually one of the writers asking the coach what he knows about a trade," Kukoc said. "And the coach gave him a question what he heard about it. So this journalist actually sent him a note about whatever he knew, and the coach circled the ones that he heard of."

At this point, the room filled with laughter.

"We had a meeting right away after that," Kukoc said, "and the paper was there."

The bottom line is that Kukoc is no longer a member of the Bulls, no longer the only real link to their glorious past. And his presence in Philadelphia with Allen Iverson must make other teams in the East just a little nervous.

"If we need a player, a lot of players come to mind," Iverson said. "But to be able to get that player, you can't ask for much more. Toni can talk to us about what it takes to get there."

The Sixers got Kukoc from the Bulls and sent Larry Hughes and Billy Owens to Golden State. The Warriors sent a No. 1 draft pick to the Bulls, who need plenty of them to rebuild from the breakup of their dynasty.

"The last two years, we didn't play much of competitive basketball," Kukoc said. "So I'm glad to be in a place that is doing that right now."

Kukoc was rumored to be headed to the Los Angeles Lakers, to be reunited with his former coach, Phil Jackson. Another potential deal had him going to Portland to play with former teammate Scottie Pippen.

Though Kukoc acknowledged finding the trade possibilities on a piece of paper, he said he put little stock in the rumors.

"The rumors with me and Phil or Scottie, the Lakers or Portland, you guys created these things," Kukoc said. "I guess you would know these things better than I do."

Contradicting recent statements tat he was considering going home to Europe after the season, Kukoc said he'd decided to stay in the NBA and believes he has four good years left. But he wouldn't commit to signing with the Sixers. Kukoc is on the last year of his contract, and the Sixers could offer him more money than any other team.

"I am here two hours, so I can't tell you about these things right away," Kukoc said. "I don't want to give a straight answer right now. If everything works fine, I don't see any reason why I should not stay here."

Kukoc didn't practice Thursday and hadn't undergone a physical when he met with reporters for a late afternoon news conference. He said the back injury that forced him to miss the first 24 games was completely healed.

"I think we've got to give him a feel," Brown said. "He's come off the bench before. I think the championship years he came off the bench. We'll probably go that way for a while for sure."

The deal was well received among Kukoc's new teammates, who didn't have enough firepower to take scoring pressure away from Iverson until now.

"He can bring things to practice that some of us guys need to know to win championships," said George Lynch, whose playing time could take a hit with Kukoc in the mix. "He played with one of the greatest players ever, so hopefully he can bring some of that influence to us."

Iverson, who supposedly became close with Hughes the last two years, blamed Hughes for failing to fit in with the Sixers.

"To be honest, Larry had his opportunities to play more minutes," Iverson said. "All he had to do to get more minutes was show the coach, do whatever it takes to be on the court.

"Forget going back to me and Larry playing the same position. You do whatever it takes to make the team better. If Larry had to play point guard, he had enough talent to play the point. I don't think Larry was willing to do that."