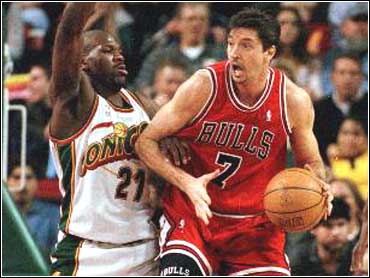 If the Chicago Bulls are trying to trade Toni Kukoc, the price might be going up.

Kukoc, the subject of trade talk, scored 31 points on 13-for-21 shooting and Ron Artest added 24 points Wednesday night, as the Chicago Bulls stunned the Seattle SuperSonics 88-81.

Rumors have had Kukoc headed for many teams before the Feb. 24 trading deadline. He showed off his full array of skills against Seattle. He hit the outside shot and also scored inside and grabbed eight rebounds.

"I was more aggressive and got more involved with the post-up game," Kukoc said. "I was on my game so it didn't really matter who they (the Sonics) put on me."

The Sonics tried Ruben Patterson, Vin Baker and Horace Grant on the 6-foot-11 Kukoc and he was only slowed down by Grant.

"Toni's shooting has been affected by his shot selection," Bulls coach Tim Floyd said. "He was terrific. He took the ball aggressively to the rim all night."

Kukoc carried the Bulls for most of the game. Then Artest took over the fourth quarter with 14 points as Chicago ended a four-game losing streak. Artest's two free throws put the Bulls up 80-76 with 1:10 left in the game.

After Vin Baker's putback basket cut the deficit to 80-78 with 54 seconds left, Elton Brand countered with a five-footer for an 82-78 lead with 31.7 seconds left.

Baker led the Sonics with 19 pints. Gary Payton finished with 12, only two over the last two periods.

The Sonics lost their second straight home game following a loss Saturday to the Milwaukee Bucks.

Chicago's defense kept Payton in check. Artest shadowed Payton much of the game and the Sonics All-Star guard was 5-for-18 from the field. Artest equaled his season high and converted 12 of 13 free throws.

"It was fun checking him (Payton)," Artest said. "I had to use all my strength and speed to stay with him because he's a great player."

With the Sonics down 82-78, Payton was called for an offensive foul and whistled for a technical after Brent Barry fouled Artest.

Emmanual Davis canned a 3-point shot pulling the Sonics within 85-81 with 21.8 seconds left. That was close as the Sonics would come.

Sonics coach Paul Westphal was upset with his team's approach to the game.

"We were sleepwalking in the first half. It was pathetic. By the time we decided to play hard, they had their confidence up and they established the pace of play."

Barry had eight points in the third period and started a 7-0 run with a 3-point shot that put the Sonics ahead 49-44.

The Sonics have the second-most road wins in the league with 15, but their play on their homecourt has been erratic. Their play was lethargic and slipshod through three periods and the Bulls took advantage outscoring them 31-19 in the final quarter.

Baker, who scored a season-high 33 points Tuesday night against Utah, had 11 on in the first half. Payton added 10 in the opening half.