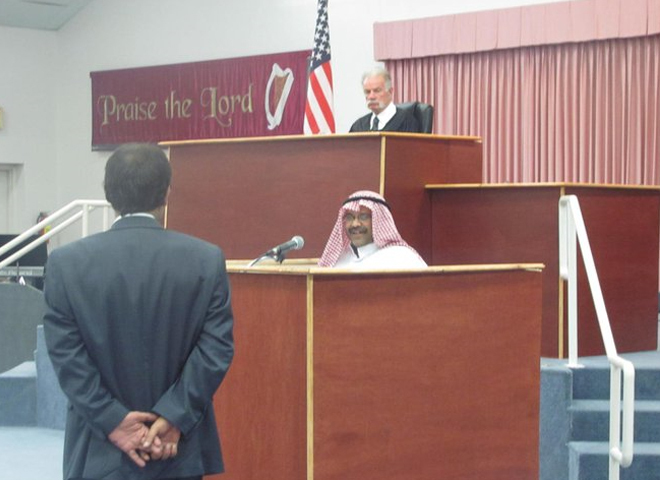 Terry Jones, the Gainesville, Fla., pastor who ignited rage across the world with his scuttled plans to burn a Koran on September 11, has overseen the burning of a Muslim holy book, after a mock trial found the Koran guilty of crimes against humanity.

The torching of the book was part of an event Jones called International Judge the Koran Day, which was streamed live online and promoted on Facebook.

Jones, pastor of the Dove World Outreach Center, himself presided over the trial Sunday as "judge," hearing evidence and testimony against the Koran.

Jones, speaking from a judge's bench, said that like in an American court, if one is found guilty, there are consequences.

"And because of that you will face punishment. You will go to jail, you will possibly someday be electrocuted, or you will be shot up with poison and you will die," he said. "That is what justice is."

And to anyone watching who may disagree with the verdict, Jones said, "All you have to do is put together your own trial."

The "jury" considered the charges of crimes against humanity; of promoting terrorist acts; of death, rape and torture of people worldwide "whose only crime was not being of the Islamic faith"; and of crimes against women, minorities and Christians, and with promoting prejudice and racism.

The trial featured as prosecutor a Christian convert from Islam. An Imam from Dallas, Texas, served as the book's defense attorney.

After several minutes of deliberation, the jury handed its verdict to Jones: Guilty on all counts.

An online poll had helped decide the punishment following a guilty verdict. (The choices: Burning, shredding, drowning, or firing squad.)

The kerosene-soaked book was placed in a metal tray and ignited with a barbecue lighter by pastor Wayne Sapp.

About 30 people attended the trial and execution. One supporter of Jones, Jadwiga Schatz, told Agence France-Presse that she was concerned about the growth of Islam in Europe.

"These people, for me, are like monsters," she said. "I hate these people."

The U.S. Embassy in Islamabad, Pakistan, issued a statement condemning the burning, and rejected religious intolerance in any form.

"The deliberate destruction of any holy book is an abhorrent act," Ambassador Cameron Munter said. "The U.S. commitment to freedom of religion and freedom of expression goes back to the founding of our nation and is enshrined in the Constitution."

"This is an isolated act done by a small group of people that is contrary to American traditions," the embassy said.