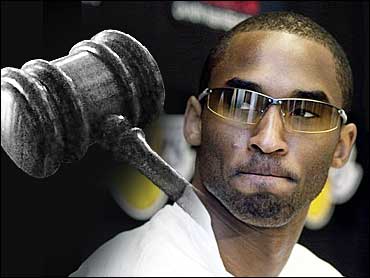 The sexual assault trial of National Basketball Association All-Star Kobe Bryant will begin Aug. 27, more than a year after he was accused of raping a 19-year-old woman.

The trial date was set Friday by Judge Terry Ruckriegle. It is expected to last three to four weeks, including the process of questioning and choosing jurors.

CBS News Correspondent Lee Frank between 800 and 15-hundred prospective jurors will be summoned to appear on Aug. 27 to fill out questionnaires. They'll be asked about 100 questions concerning what they might already know or think about this highly-publicized case. Extensive publicity and the fact that many people are acquainted with the alleged rape victim are challenges in selecting a jury for Bryant's trial, Frank reports.

Bryant, 25, has pleaded not guilty, saying he had consensual sex with the woman at a Vail-area resort June 30, 2003. If convicted, the Los Angeles Lakers star faces four years to life in prison or 20 years to life on probation.

Earlier in the day, the major issue in the case revolved around transcripts of a closed-door hearing in the Kobe Bryant case, accidentally released to the media by a court reporter which set off a battle between the judge and media organizations that received the documents.

Ruckriegle issued an order late Thursday threatening contempt of court if the material was published. The news organizations that received the transcripts, including The Associated Press, contended the order was unconstitutional, but none immediately reported on any of the material.

The organizations said they will appeal the order to the Colorado Supreme Court on Monday.

The transcripts were from a two-day closed-door hearing earlier this week that dealt primarily with witness testimony and evidence on the accuser's sex life.

Media attorney Tom Kelley noted that the media organizations had not sought the transcripts, which were sealed by the judge. In such cases, it is up to the organizations to decide whether to publish the material, not a judge or any other government official, he said.

"Regardless of what information may be contained in this hearing transcript, and regardless of whether any individual media outlet ultimately decides to publish it, these members of the press seek to vindicate this fundamental principle, one that lies at the heart of our system of government," Kelley said.

The transcripts were of a hearing earlier this week Ruckriegle. The court reporter intended to e-mail them to the judge and other court staff, but accidentally used the wrong group of addresses, state courts spokeswoman Karen Salaz said.

Shortly after he learned of the mistake, Ruckriegle issued an order saying the transcripts were not for public dissemination and that any revelation of their contents could bring a contempt of court citation.

The judge had anticipated the order would be challenged, Salaz said.