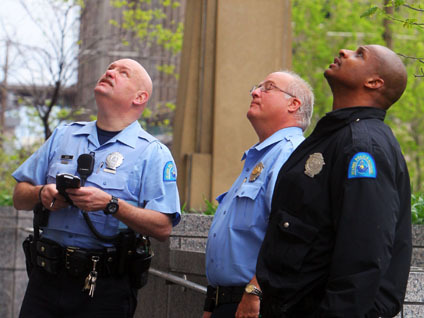 ST. LOUIS - A "knuckle-headed corrections officer" is to blame for the escape of two men who apparently climbed down a homemade rope Friday morning to escape from a St. Louis detention center, the mayor's chief of staff said.

The St. Louis Post-Dispatch reported that Vernon Collins, 34, and David White, 33, were discovered missing just before 7 a.m., but police believe they might have been gone for 90 minutes by that time. Both were still at large late Friday morning.

Collins was in jail on a charge of assaulting a law enforcement officer, while White was being held on charges of assault, burglary and property damage. Collins also is accused of overpowering a corrections officer.

Jeff Rainford, Mayor Francis Slay's chief of staff, told the newspaper that to corrections officer failed to fully investigate noises coming from their cell. He said the escape was the first at the $101 million, state-of-the-art downtown jail that was built in 2002.

Police said the inmates apparently broke out a second-story window and scaled down the front of the building using black cloth tied together with rope. A security camera mounted below the broken window appeared to have been knocked off its mount and was dangling from the building Friday morning.

No blood was visible near the window or on the ground.

Both men were being held in the center's medical unit, Rainford said. He said a nurse heard noises coming from their cell in the middle of the night and told a corrections officer, who went to the cell and asked what was going on. The inmates told the officer they were exercising.

The nurse heard noises again and the same officer went back to the cell, but didn't go inside, Rainford said.

"This was not some master-minded scheme," he said. "This was one knuckle-headed corrections officer."

Daphne Golden, who was waiting at the jail to bail out her son Friday morning, said she heard corrections officers declare that all inmates were accounted for over an intercom at shift change around 6:30 a.m. Moments later, jailers began running around, yelling to secure all doors and windows, she said.

"They were running around like wild people," she said.

The jail is run by the city's Public Safety Department. Corrections superintendent Eugene Stubblefield said the men used a bedsheet to escape.