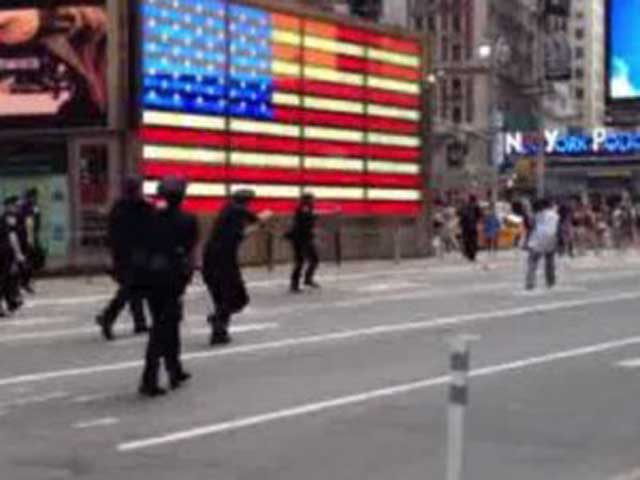 (CBS/WCBS/AP) NEW YORK - Police say they shot and killed a man in midtown Manhattan over the weekend, just blocks away from Times Square after he allegedly charged officers with a kitchen knife.

According to CBS New York, police identified the man as 51-year-old Darius Kennedy of Hempstead, Long Island. Police said Kennedy was smoking marijuana near the military recruiting station when officers approached him around 3 p.m. Saturday. When police asked for identification, police say Kennedy instead pulled out an 11-inch knife.

Police say Kennedy repeatedly refused orders to drop the weapon and began backing away from them. According to police, officers pepper-sprayed Kennedy six times but he held onto the knife throughout, wiping the spray off his face. Finally, he allegedly lunged at police and two officers shot him in the torso. Kennedy was taken to Bellevue Hospital, where he was pronounced dead.

Kennedy had a total of 10 prior arrests, the most recent one for marijuana possession. In 2008, he was taken to a hospital for observation after knocking down garbage cans in Times Square.

According to the New York Times, NYPD spokesman Paul J. Browne said police arrested Kennedy one month later, in November 2008, after he threatened officers with a screwdriver when they tried to stop him from harassing people in passing vehicles. He was reportedly sentenced to 40 days in jail for resisting arrest.