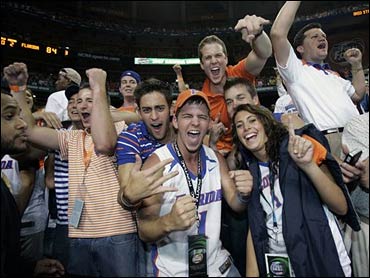 The Portland Trail Blazers acted like they were due for a loss, and that's exactly what they got.

Marcus Camby, Charlie Ward and the New York Knicks' league-leading defense brought a screeching halt to Portland's 10-game winning streak, opening a big early lead that held up the rest of the night in a 91-78 victory Saturday.

"I think it was just time for us to not get a win," Portland's Steve Smith said. "We've won so many, but we never played tonight the way we've been playing."

Camby had the bulk of his 16 points and 15 rebounds in the decisive first half and Ward made four 3-pointers in scoring a season-high 17 points as New York ended the longest winning streak in the NBA this season.

The Knicks held the Trail Blazers to their second-lowest point total of the season in handing them their first loss since Dec. 22. They also held their opponent under 100 points for the 30th consecutive game, extending their NBA record.

"They scored pretty easily in that first half and got us down big, and then we were fighting from behind all night long," Blazers coach Mike Dunleavy said. "We had our opportunities to really make them hear some footsteps, but we weren't able to convert or get it under 10. You get a team under 10 and they start to hear it a little bit, but we didn't do a good enough job on that."

It was a game of catch-up for the Trail Blazers the rest of the way, and they weren't up to the task against a Knicks defense that has been holding its opponents to an average of 83.7 points.

Portland, which shoots a league-leading 47.2 percent from the field, was held under 40 percent by the Knicks.

A pair of foul shots by Dale Davis made it 58-50 midway through the third quarter, but Ward scored seven points over the rest of the quarter as the Knicks used a 14-4 run to take a 72-54 lead into the fourth.

Portland failed to score from the field over the first 4@1/2 minutes of the fourth and fell behind by 23. Greg Anthony hit three 3-pointers the rest of the way and Portland pulled within eight with under a minute left, but Luc Longley made two free throws with 46 seconds left to restore a double-digit lead and wrap up the victory.

"I think there are a lot of myths about our team," Knicks coach Jeff Van Gundy said. "One is that we don't get ready to play bad teams, which we really have. We lost to Philly and Utah here in blowouts, so we have bad games, we have good games."

The good has outweighed the bad to such a degree lately that the Knicks have won eight of their last nine games.