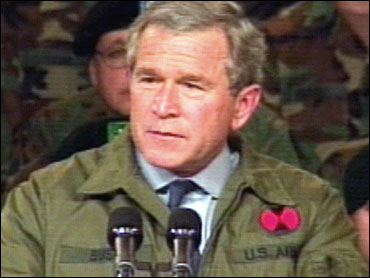 Doctors told President Bush on Thursday that he did not need surgery on his sore knees, but recommended a careful exercise regimen and stretching, the White House said.

"Neither surgeon recommends surgery," according to a medical summary of the president's exam issued by the White House.

Mr. Bush maintains a "pretty rigorous workout schedule," press secretary Scott McClellan said in a statement. "While he's not really running much anymore, he continues to work out regularly."

The pain only comes when Mr. Bush runs, he said.

While at the medical center, the president also visited with wounded troops and praised the hospital staff for "healing the defenders of our country." He said he was especially moved to see that a triple amputee he'd previously met now could walk.

"I remember coming here a couple months ago to pin the Purple Heart on a fellow who lost both legs and one arm. Today, I saw him walking," Mr. Bush said, to loud cheers from his audience.

It was the fourth time since the war on terror began that Mr. Bush visited privately at the medical center with wounded troops recovering there. Walter Reed has treated 2,100 patients from the Iraq war alone.

The president met with about 30 soldiers admitted to the hospital for orthopedic injuries stemming from their service in Iraq and Afghanistan, and separately with about 20 physical therapy outpatients and their relatives. Mr. Bush honored some with Purple Hearts, the military award for wounded service members.

"We've put a lot of fine troops into harm's way to make this country more secure and the world more free and the world more peaceful. We ask them to face great dangers to meet a national need," Mr. Bush told about 200 Walter Reed doctors, nurses and other staff.
I
In return, he said, "We have made a commitment ... to provide excellent health care, excellent care to anybody who is injured on the battlefield. Here at Walter Reed, all of you are making good on that commitment you're saving the lives of liberators, you're healing the defenders of our country, you're comforting the champions of freedom."

Mr. Bush also dropped in on Secretary of State Colin Powell, whom he reported was "doing very well" after Monday's prostate cancer. Powell was later discharged from the hospital.

Mr. Bush went to Walter Reed on Jan. 17 to visit injured soldiers from Afghanistan. On April 11, as well as on Sept. 11, he met privately with soldiers being treated for wounds suffered in Iraq and gave 18 of them the Purple Heart. He also has visited with wounded troops at the National Naval Medical Center in Bethesda, Md.