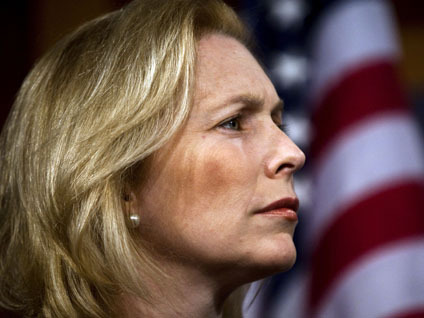 Gillibrand, who was seated only a few feet away from Reid at Bloomberg's New York townhouse, flushed with embarrassment at the comment, CNN reports.

According to a Politico source, Reid delivered remarks praising New York's senior senator, Chuck Schumer, before turning to Gillibrand and adding that, "many senators are known for many things," and that "we in the Senate refer to Sen. Gillibrand as the hottest member."

Reid spokesman Jim Manley acknowledged that Reid made the comment, but emphasized that the Nevada senator had then gone on to compliment Gillibrand for a variety of non-physical attributes, including her extensive knowledge of securities law. "What can I say, she made The Hilll's 'Most Beautiful' list," Manley said to Politico. "Of course [Reid] also went on to praise her skill and tenacity and described her as an effective member of the New York delegation as well."

"The Leader was saying nice things about the work Senator Gillibrand and Senator Reid have done together over the last year and half, and made a joke referencing to the Hill article from earlier this year," Gillibrand spokesman Matt Cantor said this morning to CNN.

"Senator Gillibrand has the utmost respect for Senator Reid and looks forward to continue working together to repeal [Don't Ask Don't Tell], pass 9/11 health, and create good-paying jobs across the country," Cantor said.

Gillibrand, who was appointed to the New York Senate after Hillary Clinton was named Secretary of State, was ranked number three on the Hill's "50 Most Beautiful People" list earlier this year.