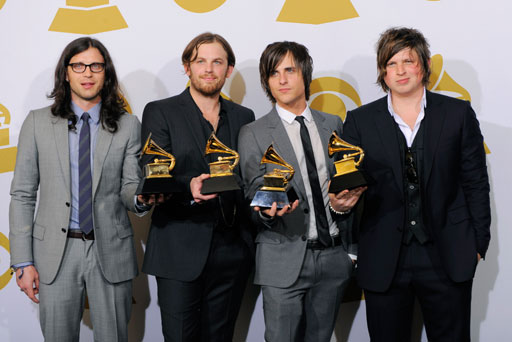 ST. LOUIS (CBS/AP) Nashville rock band Kings of Leon was forced to abandon the stage at the Verizon Wireless Amphitheater because of a bombardment of pigeon droppings.

PICTURES: Kings of Leon at Bonnaroo 2010

The Grammy-award winning band halted its Friday night concert at the St. Louis venue after three songs when the infestation of birds in the arena's rafters dropped an onslaught of feces.

Bassist (Michael) Jared Followill was even hit in the face by one dropping.

"Jared was hit several times during the first two songs. On the third song, when he was hit in the cheek and some of it landed near his mouth, they couldn't take it any longer," Andy Mendelsohn of the band's management company, Vector Management, said in a statement.

"It's not only disgusting - it's a toxic health hazard," Mendelsohn added. "They really tried to hang in there. We want to apologize to our fans in St. Louis and will be back as soon as we can."

The Kings of Leon consists of three Followill brothers - Anthony, Ivan, and Jared - and their cousin Matthew who plays lead guitar

Their tour will continue in Cleveland Monday and in Toronto Wednesday.