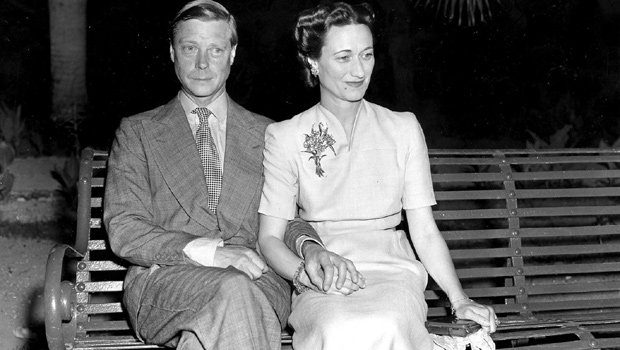 (CBS) Saturday marks the 75th anniversary of King Edward VIII's abdication of the throne so he could marry Wallis Simpson, a twice-divorced American socialite - a decision that shook the British monarchy to its core.

Now, the entertainment industry seems to be fascinated with the lives of the Duke and the Duchess of Windsor, as they became known. The abdication propelled the plot in the Oscar-winning film "The Kings Speech" and Edward and Wallis Simpson were the subjects for the recently premiered film "W.E.," which was Madonna's sophomore directorial effort.

Pictures: Duke and Duchess of Windsor

In 1936, only a couple of months into his reign, Edward caused a constitutional crisis by proposing to the twice-divorced Simpson. Even though he was Supreme Governor of the Church of England, the church would not sanction a re-marriage of someone whose former spouse was still alive.

On Dec. 10, 1936, Edward signed the Instrument of Abdication and his brother Prince Albert, Duke of York, whose trouble with stuttering was the subject of "The King's Speech," was set to take over the throne. Albert's wife, who later became the Queen Mother, is said to have never forgiven Edward or Wallis for their actions, according to the U.K. Press association.

After Edward and Wallis were married in June 1937, they lived in exile mostly in France. The duke died in 1972 and the duchess in 1986.

The royals will not be marking the anniversary, reports UKPA.