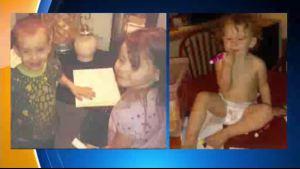 LEBEC, California — When the body of a woman was found Aug. 14 in Lebec, L.A. sheriff’s detectives knew they had a homicide on their hands. Now, detectives say the woman’s children may be the victims of a kidnapping.

The pair are believed to have Harvill’s three children; Ryle Watkins, 5, Brayden Watkins, 3, and Joslynn Watkins, 2. Humphrey is the childrens’ aunt.

Robertson and Humphrey are wanted on suspicion of kidnapping, and detectives want to question them about Harvill’s death.

Robertson and Humphrey are believed to be driving Harvill’s 1999 Ford Expedition. It may have a California license plate, 7BEK024. The vehicle may also have temporary, paper license plates.

Joshua Robertson has a criminal record. Both he and Humphrey are considered armed and dangerous. Authorities say anyone who sees them should call 911.