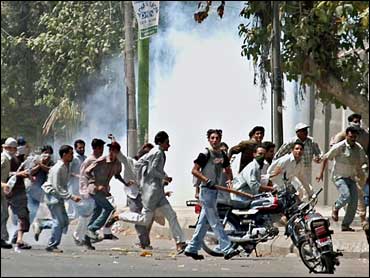 Sunni and Shiite Muslims exchanged gunfire Saturday, killing at least one person and injuring two in sectarian clashes triggered by a suicide bombing at a mosque, the latest in a string of terrorist attacks that have rocked Pakistan's largest city.

Investigators said that a suicide attacker dressed like a Muslim cleric likely detonated the bomb that killed 14 people and wounded more than 200 at a Shiite mosque inside a religious school in Karachi during Friday prayers.

The blast set off riots by angry Shiite youths. The unrest continued on Saturday, despite patrols by police and paramilitary forces across the tense city, where most businesses remained shuttered.

Police detained 50 Shiite youths after arson attacks and stone-throwing around the city. Protesters set fire to two police posts and smashed shop windows. They also burned vehicles and the office of a state-run gas company.

The gunbattle occurred after Shiites mourning those killed in Friday's blast pelted a Sunni mosque with stones in Karachi's Sohrab Goth district, said police officer Latif Siddiqui. A passerby died of gunshot wounds and two other people were injured.

About 80 percent of the 150 million people in this Islamic nation are Sunni Muslims, and the rest Shiite. The vast majority live together in peace, but small radical groups on both sides frequently target each other's places of worship and leaders.

No group has claimed responsibility for Friday's bombing, which came two months after Sunni Muslim radicals attacked a Shiite religious procession in the southwestern city of Quetta, killing 44 people.

Police on Saturday released a sketch of the suicide attacker killed in Friday's bombing based on descriptions from survivors. It shows a man aged about 30 with a short black beard and mustache, wearing a black turban and robe.

"The statements given to us by some injured worshippers and other evidence make us believe that a man, who was dressed like a Shiite cleric, was in fact the suicide bomber," said senior investigator Manzoor Mughal.

He said about 6.6 pounds of explosives were used in the bombing — the latest in a series of sectarian and terrorist attacks in this city of 15 million since Pakistan threw its support behind the U.S.-led war on terrorism in late 2001.

Pakistani newspapers on Saturday criticized the government of President Gen. Pervez Musharraf — who has vowed to crackdown on extremists — for failing to stop the violence. Musharraf, who has angered hardliners with his support for Washington, has himself faced at least three assassination attempts.

"How many attacks must take place for the government to realize that something is missing in its anti-terrorism strategy?" Dawn said in an editorial.

The English-language daily called for tough action against those religious schools and prayer leaders in Pakistan preaching "sectarian hatred and militancy."

Musharraf condemned the attack as a "heinous act of terrorism."

In New York, U.N. Secretary-General Kofi Annan urged Pakistan to take action against the perpetrators to bring them to justice.

In March, police defused a huge bomb outside the U.S. Consulate in Karachi, minutes before it was timed to detonate.