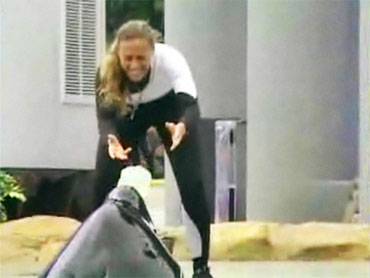 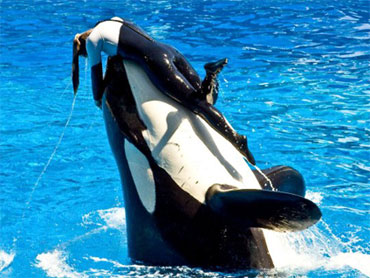 Photo: Amateur footage of Dawn Brancheau and Tilikum moments before he killed her.

Todd Connell videotaped seven minutes of footage which shows Brancheau working with Tilikum the killer whale. He told CBS affiliate WKMG, which is running the footage, that he shut off the camera seconds before Tilikum grabbed Brancheau by the pony tail and dragged her underwater.
The 40-year-old died of multiple traumatic injuries and drowning Wednesday.

"It was terrible. It's very difficult to see the image," said Brazilian tourist Joao Lucio DeCosta Sobrinho. He and his girlfriend said they watched the whale show at the park two days earlier and came back to take pictures. But on Wednesday the whales appeared agitated.

"He was thrashing her around pretty good. It was violent," witness Victoria Biniak told the Orlando Sentinel. The whale "took off really fast in the tank and he came back, shot up in the air, grabbed the trainer by the waist and started thrashing (her) around," she told the paper.

She said the attack was so violent that Brancheau's shoe flew off.

Some workers hustled the audience out of the stadium while the others tried to save Brancheau, but it was too late.