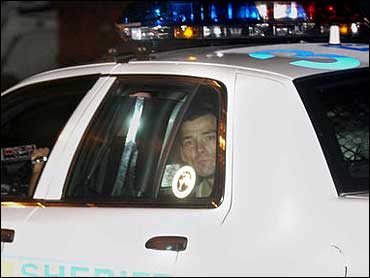 The suspect in five killings in a mobile home called a newspaper from jail and said he wants to plead guilty and be executed.

The man, who identified himself as William Wells, told The (Jacksonville) Florida Times-Union he was calling to confess. He said his crimes snowballed after he accidentally shot his wife.

"It turned into a bad situation, but it all started as an accident," Wells told the newspaper Monday.

Jail officials said they could not confirm Wells made the call, but the newspaper said it believes the caller was the 27-year-old because he provided Wells' Social Security number, birth date and the names of family members.

He also described details of the crimes that matched an unpublished account given by relatives of calls Wells made during his May 24 standoff with police.

Wells is accused of fatally shooting his wife, Irene, 30; her brother, John S. McMains, 32; her father, Bill McMains, 60; and two acquaintances, James Lee Young, 20, and Richard Reese, 39, over several days at the couple's home in Mayport, about 15 miles northeast of Jacksonville.

Wells said he and Irene Wells were estranged and that he had gone to the house to reconcile. Everything was fine, he said, until the woman pointed to a gun and said, "This is in case you get stupid."

Wells said he thought the gun was unloaded because it didn't have a magazine. He said he put it to Irene Wells' head and squeezed the trigger, not knowing a bullet was in the chamber.

"She gasped for a breath of air and fell over," he said. "It looked like I executed her, and I knew it as soon as it happened. I lay on the floor for quite a few hours in a pool of blood, holding her."

Wells said he sent his stepdaughter to her grandmother's home, but kept his 4-year-old son with him, saying he "wanted to spend my last minutes on Earth with my son." He said the children did not know what had happened.

Wells said he shot Irene Wells' brother and father after they came to the home separately and became enraged after discovering she was dead.

Wells said he shot Reese — who he said was having an affair with Irene Wells — after inviting him over and smoking marijuana with him. The caller said he killed Young after he delivered $650 worth of crack and made a remark about getting a gun and stealing a bag of marijuana.

Wells said he wants to plead guilty to four charges of first-degree murder, but hopes prosecutors will accept a guilty plea to involuntary manslaughter for his wife's death. He also said he wants to be executed.

"I'm here not to make excuses but to save you, the citizens and taxpayers of Duval County, the time and money of a long, drawn-out trial," Wells said.

State Attorney Harry Shorstein said such an offer would be premature. Shorstein said he will decide whether to seek the death penalty, then ask Wells' defense lawyers for evidence that could dissuade him.

Wells said he plans to fire his lawyers, who he said were considering claiming he was mentally ill.

Chief Assistant Public Defender Bill White said he could not discuss the case.