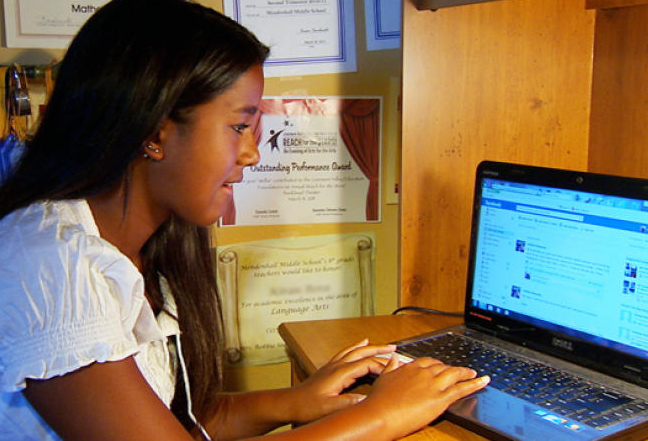 Kids who regularly plugged into social networking sites before bedtime reported sleeping nearly an hour less on school nights than those who rarely connected online, a new study shows.

"Using technology in the bedroom may result in sleep loss, delays in initiating sleep, daytime sleepiness and more," the study's lead author, Teresa Arora, told Reuters Health in an email.

"In turn, this may affect daytime performance, particularly at school," Arora, from Weill Cornell Medical College in Doha, Qatar, said.

The researchers found kids ages 11 to 13 slept significantly less when they frequently communicated on a cell phone, surfed the Internet, played video games, watched television, listened to music and even if they used a computer to study before hitting the sack.

Social networking was associated with the biggest loss of sleep. Those who said they usually connected to friends online before getting into bed reported sleeping the least - an average of 8 hours and 10 minutes a night - compared with 9 hours and 2 minutes among those who never connected.

For the current study, the researchers analyzed surveys on sleep and technology habits completed by 738 students at seven randomly selected schools in the Midlands region of England in 2010.

Kids who frequently viewed TV before bed were four times more likely to report waking up several times during the night than non-viewers, and frequent social networkers were three times more likely to wake up a lot. Kids who regularly played video games or listened to music at bedtime had significantly more difficulty falling asleep, the researchers reported in Sleep Medicine.

Teenagers' sleep schedules naturally tend to shift as a result of feeling alert later at night and having trouble falling asleep. But technology may worsen the tendency to burn the midnight oil, Arora and her colleagues wrote.

The findings came as no surprise to Dr. Nanci Yuan, medical director of the Sleep Center at Lucile Packard Children's Hospital in Palo Alto, California. She was not involved in the new study.

"The advent of technology has made every age group, but especially teenagers, have difficulties with their sleep," Yuan, who also studies sleep disorders at Stanford University, told Reuters Health.

"We're seeing more sleep-deprivation problems in society as a whole, and we're seeing it more in teenagers."

Children from 11 to 13 years old need between 10 and 11 hours of continuous sleep a night for optimal health, she said. She recommended adolescents shut down all electronics, ideally removing them from the bedroom, at least one hour, and preferably two, before turning in.

"We have to make sleep a priority as important as good nutrition and exercise," she said.

Christina Calamaro similarly stressed the need to unplug at least an hour before lights out. She has studied the effect of technology on adolescent sleep at Nemours/Alfred I. duPont Hospital for Children in Wilmington, Delaware but was not involved in the current study.

Calamaro called on healthcare professionals to do more to educate parents about children's need for uninterrupted sleep.

"We need to teach adolescents boundaries with technology," she told Reuters Health. "We need to really drive home that message to parents about modeling sleep behavior in their home."