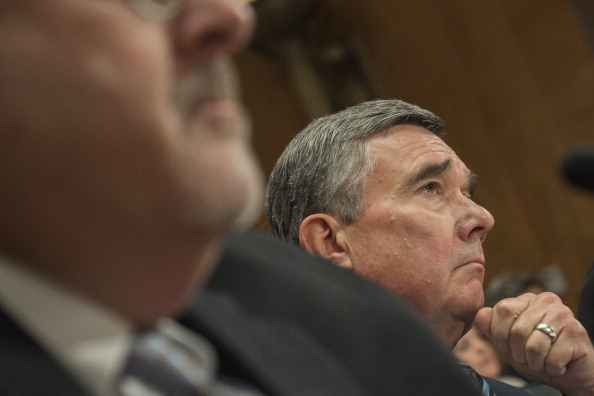 WASHINGTON -- Top Obama administration officials told senators Wednesday they're struggling to keep up with the surge of immigrants at the Southern border, acknowledging they've been overwhelmed as children show up by the tens of thousands from violence-torn Central America.

"We have not been what I would say successful yet" in ensuring that the unaccompanied kids are processed by the Border Patrol as quickly as required, Federal Emergency Management Agency administrator Craig Fugate testified before the Senate Homeland Security and Governmental Affairs Committee.

"The children continue to come across the border. It's a very fluid situation," Fugate said. "Although we have made progress, that progress is oftentimes disrupted when we see sudden influxes of kids coming in faster than we can discharge them, and we back up."

Gil Kerlikowske, the U.S. Customs and Border Protection commissioner, said that the number of children picked up since October now stands at 57,000, up from 52,000 in mid-June, and more than double what it was at the same time last year.

The situation, Kerlikowske said, "is difficult and distressing on a lot of levels."

The testimony came a day after President Barack Obama appealed to Congress to give him $3.7 billion in emergency spending to deal with the crisis, which has become a political test for his administration as it sparks fierce debate on Capitol Hill and beyond.

The president was in Texas Wednesday for a fundraising trip, but he resisted calls to visit the border. Instead Obama planned to meet in Dallas with faith leaders and Texas officials, including Republican Gov. Rick Perry.

The crisis gave Republicans a fresh opportunity to question the Obama administration's competence even as it complicated the debate over the nation's fractured immigration laws.

Republicans at Wednesday's hearing slammed Obama administration policies, blaming his efforts to relax some deportation rules for contributing to rumors circulating in Central America that once here, migrant kids would be allowed to stay.

Sen. John McCain, R-Ariz., noted that a high percentage of the children fleeing El Salvador, Honduras and Guatemala are able to succeed in their goal of staying in America because they're issued notices to appear at court hearings in the distant future, and many never do.

"Your odds are pretty good," McCain said. "There is ample incentive for them to come to this country."

Republicans insisted that the best way to deter the flow of migrants would be to deport the kids faster. Johnson criticized a campaign of ads the administration is mounting in Central America telling people not to come here.

"They will do nothing ... nothing that planeloads upon planeloads of children would do," Johnson said.

The Obama administration says it wants more flexibility to turn the kids around more quickly, since current law requires minors from countries other than Mexico or Canada to go through the court system in what is often a lengthy process. But immigrant advocates and some Democrats are balking at that idea, arguing that it would jeopardize the children's legal protections and put them at risk.

The Department of Justice announced Wednesday that it's changing its priorities in order to respond to the crisis. Juan Osuna, director of the executive office of immigration review, testified that deportation cases involving unaccompanied child immigrants and parents traveling with children would be moved to the top of court dockets. That means lower priority cases will take even longer to wend through a court system where there's currently a backlog of more than 360,000 pending deportation cases.

Obama's emergency spending request would add more judges to the court system, but elsewhere on Capitol Hill Wednesday Republicans raised questions about it. House Speaker John Boehner was noncommittal about whether the House would vote on it.

"If we don't secure the border, nothing's going to change. And if you look at the president's request, it's all more about continuing to deal with the problem," Boehner told reporters. "We've got to do something about sealing the border and ending this problem so that we can begin to move on with the bigger question of immigration reform."

In a speech in Denver on Wednesday, though, the President turned the same accusation against Republicans in Congress, saying they "just said no to fixing our broken immigration system" and "can't get their act together" despite what he considers an unprecedented coalition backing reform.

Boehner also told reporters Wednesday that although he disagrees with Republicans who want to impeach the president based on his actions involving immigration, a view espoused by Sarah Palin, he is considering immigration related actions in his lawsuit against Obama.

Obama's decision to skip a border visit is providing more fodder for Republicans like Boehner and the handful of Democrats who say the president hasn't responded quickly and forcefully enough to the mounting crisis. While several administration officials have traveled to the border to assess the current situation, Obama's last visit was in May 2011.

"To his credit, President Obama has come to Texas in the past years to help us mourn tragedies such as Fort Hood," Sen. John Cornyn, R-Texas, said Tuesday, "which makes it all the more inexplicable why he would refuse to carve out just one hour out of his fundraising schedule in Texas over the next two days to come to the border at the sight of what he calls a humanitarian crisis."

Rep. Henry Cuellar, D-Texas, said on Fox News Monday that the president could be facing his own "Katrina moment" if he refuses to visit border facilities.

Perry, a possible GOP presidential candidate in 2016, has been scathing in his criticism of Obama, saying the White House has failed to respond to his repeated warnings about a flood of minors at the border. But Obama spokesman Josh Earnest said the White House was not worried about the optics of the president traveling to Texas without visiting the border.

Migrants are caught in Belarus-EU "hybrid warfare," and it's killing them
More