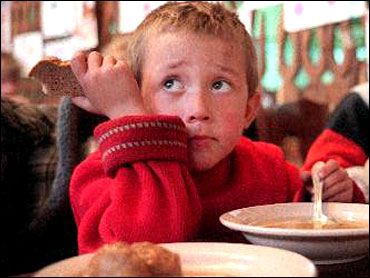 Only 6.7 million of the 16 million low-income children eligible for free or discount breakfasts are getting them, an advocacy group said Thursday after reviewing government data.

"Some of them are getting breakfast at home, and some aren't," said Jim Weill, president of the Food Research and Action Center. "We think every school should be offering breakfast to all kids. Achievement would be better and child health would be better."

Still, breakfast participation has doubled since 1987, when 3.2 million children were in the program overseen by the Agriculture Department. It reimburses schools for the meals.

The school breakfast program is like federal school lunch, which feeds 16 million low-income children. The children eating government-paid lunches at school qualify for breakfast, too.

The states that enrolled the most low-income kids last year for school breakfasts - who were already in school lunch - were Oregon and West Virginia, the report said. They provided breakfast to at least half of the low-income students eating school lunches.

The food research center ranked Wisconsin last and New Jersey 49th. They enrolled about 24 low-income students in school breakfast for every 100 in the school lunch program.

Susan Acker, a spokeswoman for nutrition at the Agriculture Department, said the agency is trying to increase participation in the breakfast program, in part by encouraging schools and states to review their enrollment to identify gaps. The department also is proposing to start a single sign-up system for lunch and breakfast.

The government spent $1.2 billion on school breakfasts last year and likely will spend about $1.5 billion this school year.