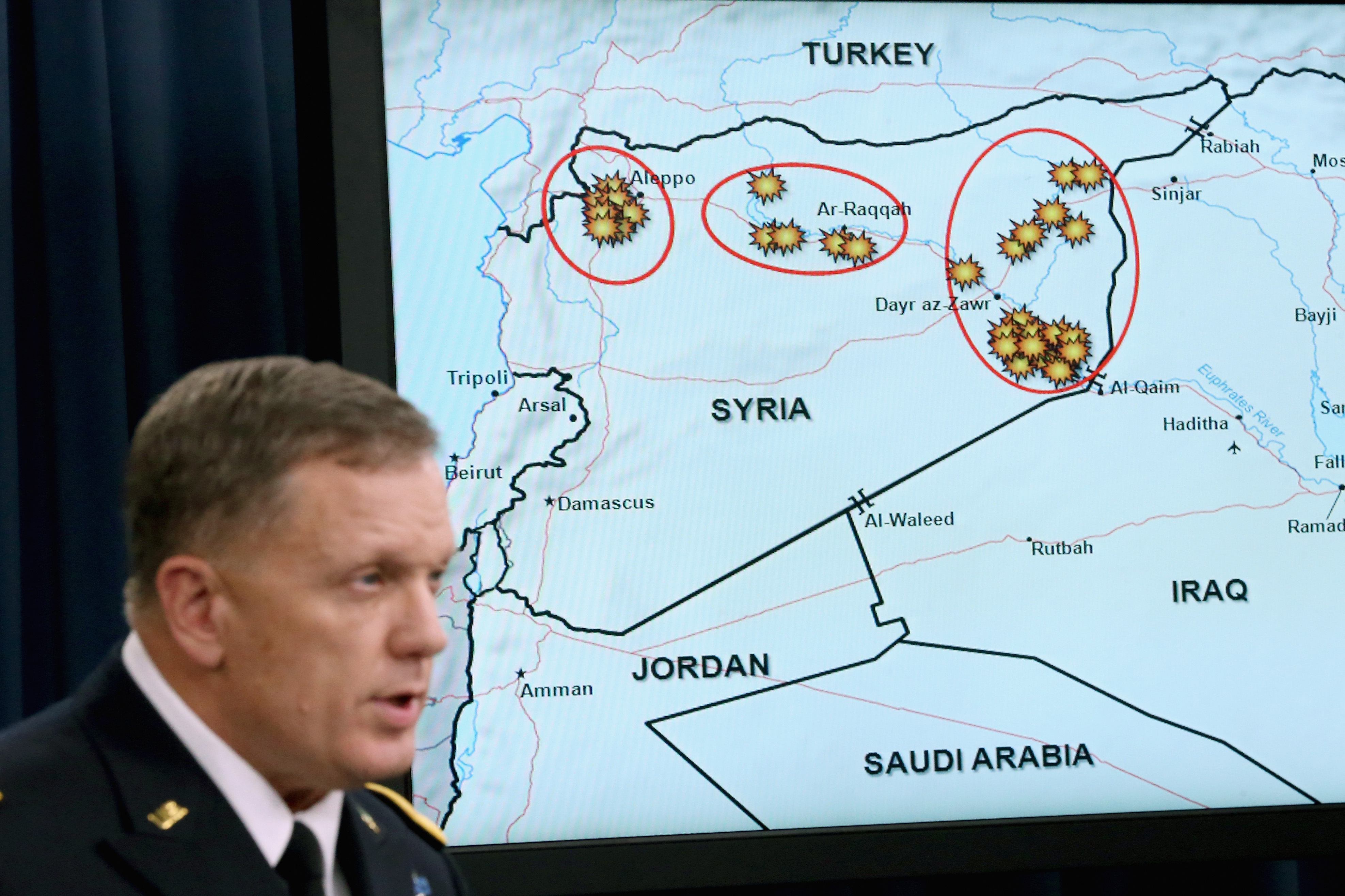 The al Qaeda affiliated group the United States struck unilaterally was "nearing the execution phase of an attack either in Europe or the homeland," Lt. Gen. William Mayville, director of operations for the Joint Chiefs of Staff, said Tuesday.

Mayville briefed reporters Tuesday morning after the U.S. carried out airstrikes in Syria. Five Arab nations in the region joined in strikes against the Islamic State of Iraq and Syria (also known as ISIS, or ISIL), and the U.S. independently targeted the Khorasan group, which Pentagon Spokesman Rear Adm. John Kirby said was plotting an imminent attack.

"We've been watching this group closely for sometime," Mayville said. "We believe the Khorasan group was nearing the execution phase of an attack either in Europe or the homeland. We know that the Khorasan group has attempted to recruit Westerners to serve as operatives or to infiltrate back into their homelands.

"The Khorasan group is clearly not focused on either the Assad regime or the Syrian people. They are establishing roots in Syria in order to advance attacks against the west and the homeland," he continued.

In an interview with Yahoo News, Attorney General Eric Holder corroborated that intelligence.

"We hit them last night out of a concern that they were getting close to an execution date of some of the plans that we have seen," he said. "And the hitting that we did last night, I think, will probably continue until we are at a stage where we think we have degraded their ability to get at our allies or to the homeland."

"I can say that the enhanced security measures that we took [in] the aviation sector some months ago [were] based on concerns we had about what the Khorasan Group was planning to do," Holder said.

But it was too early to tell whether the U.S. was able to neutralize the threat from the group.

"Give us some time to assess the targets and the effects we thought we had last night before we can answer that," Mayville told a reporter who asked if the threat had been deterred.

He also said that the U.S. "did not target individual leaders" of ISIS during the airstrikes, instead focusing on command and control centers.

Despite those facts, Kirby told reporters, "our initial indication is that these strikes were very successful."

Mayville called the strikes the "beginning of a credible and sustainable persistent campaign to degrade and ultimately destroy ISIL." As for the length of the campaign, he said, "I would think of it in terms of years."

"Last night's strikes were only the beginning," Kirby said.

Mayville also pledged that the U.S. "will not put ground forces into Syria" even though the process of training and equipping moderate Syrian rebels, which Congress approved last week, would be a multi-year process.

President Obama spoke about the airstrikes Tuesday morning, saying, "It must be clear to anyone who would plot against America and try to do Americans harm that we will not tolerate safe havens for terrorists who threaten our people."

The strikes against ISIS and Khorasan occurred three different waves, Mayville said. The first one, which began around midnight in Syria, targeted Khorasan compounds, manufacturing workshops and training camps around Aleppo and Ar-Raqqah.

The coalition partners -- Saudi Arabia, Qatar, Bahrain, Jordan and the United Arab Emirates -- joined the U.S. for the second and third waves of strikes which targeted ISIS headquarters, training camps, barracks and combat vehicles in eastern Syria. The bulk of the munitions, 96 percent, were precision guided, Mayville said.