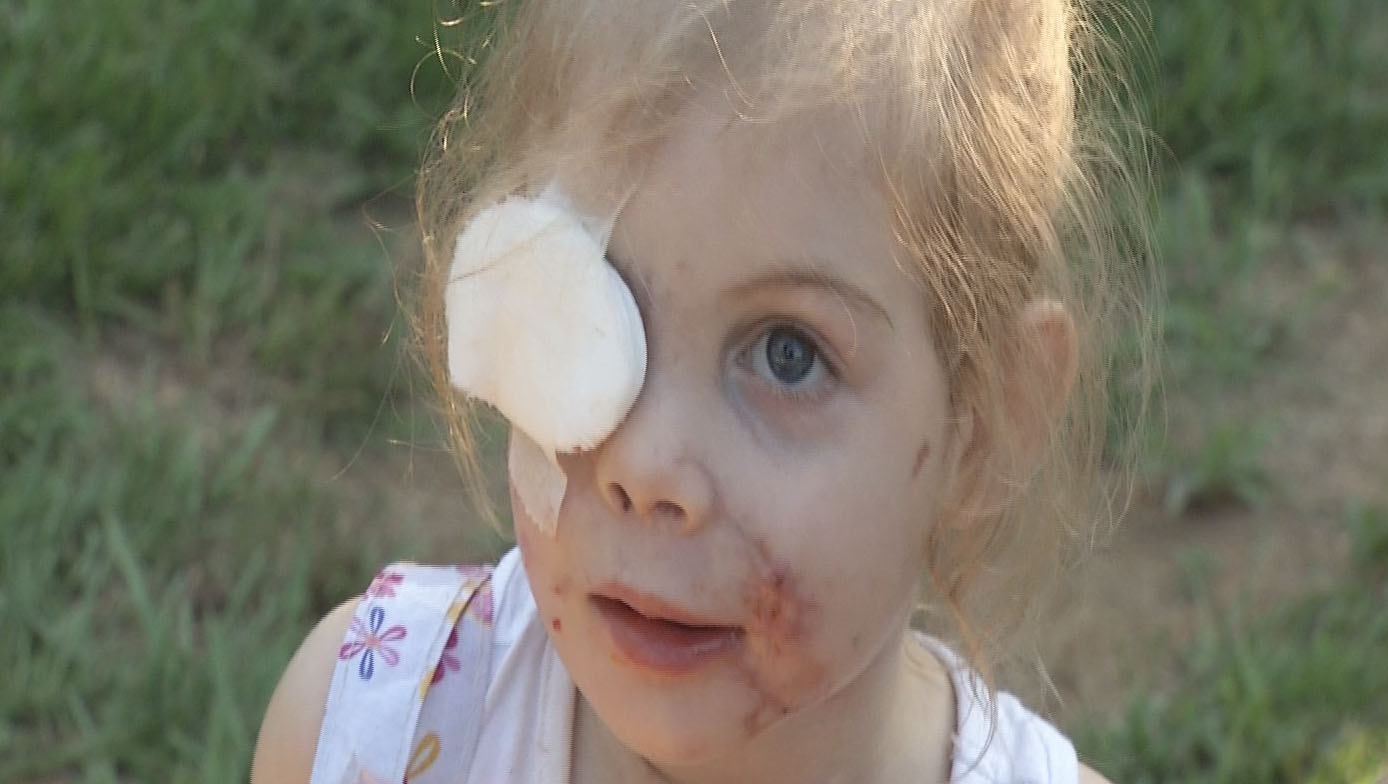 JACKSON, Miss. - KFC Corp. says it's investigating allegations that a restaurant employee in Jackson asked a 3-year-old girl to leave because her facial injuries disturbed other patrons.

The allegation about KFC was made Thursday on "Victoria's Victories," a Facebook page following Victoria Wilcher's recovery from a pit bull attack in April. The administrator posted a photo showing Victoria smiling shyly in spite of her facial scars and cartoon-decorated eye patch, and wrote, "Does this look scary to you? Last week at KFC in Jackson MS this precious face was asked to leave because her face scared the other diners."

KFC posted an apology the next morning, requesting details.

"As soon as we were notified of this report on Friday, we immediately began an investigation, as this kind of hurtful and disrespectful action would not be tolerated by KFC," spokesman Rick Maynard wrote Sunday in an email to The Associated Press. "Regardless of the outcome of our investigation, we have apologized to Victoria's family and are committed to assisting them. The company is making a $30,000 donation to assist with her medical bills. The entire KFC family is behind Victoria."

Her grandmother Kelly Mullins said Victoria had just been to a doctor's office when they stopped at the restaurant. She ordered mashed potatoes for Victoria because she thought the hungry child could swallow the soft food without chewing.

She says she was then approached by an employee.

"I sat down at the table and started feeding her and the lady came over and said we'd have to leave because we were disturbing her customers. Victoria's face was disturbing the other customers," Mullins told CBS affiliate WJTV.

"I never thought anyone would act like that," the grandmother said,

Victoria wept all the way home and now is embarrassed by her appearance - something that wasn't the case before, Mullins said.

"She won't even look in the mirror anymore," Mullins told WAPT-TV. "When we go to a store, she doesn't even want to get out" of the car.

Victoria was attacked by pit bulls at her grandfather's home. The dogs broke her nose, both jaws, cheekbones and right eye socket; the right side of her face is paralyzed and she lost that eye, according to her Facebook site. Her bottom jaw was reconstructed but she needs a feeding tube and must grow more bone in her face before more surgery is possible, it states.

The page's administrator wrote Sunday that "Victoria's Victories" had gone from 250 people praying for Victoria to thousands.

A message posted Friday evening by another Mississippi KFC franchisee, Dick West of West Quality Food Service in Laurel, offered "a big KFC picnic" for the child and her family.

West also wrote that he knows the Jackson restaurant owners "and they have never in the 50 years they have operated in Jackson allowed anyone coming into their restaurants to be treated with dis-respect."

In a message to the AP, he wrote, "I am sure KFC will make their finding public as soon as the facts are in. In the meantime, I offered to treat Victoria to a picnic because regardless of the outcome of the investigation, she has been thru more than any little girl should and I wanted to give her a special treat."