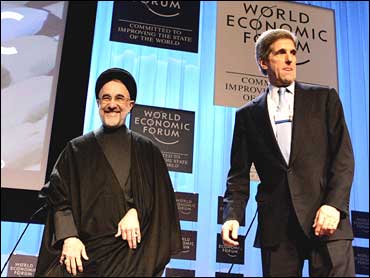 Massachusetts Sen. John Kerry slammed the foreign policy of the Bush administration on Saturday, saying it has caused the United States to become "a sort of international pariah."

The statement came as the 2004 Democratic presidential nominee responded to a question today at the World Economic Forum's annual meeting in Davos, Switzerland, where the tumult in Iraq and the Middle East took center stage.

Kerry was asked about whether the U.S. government had failed to adequately engage Iran's government before the election of hard-liner Mahmoud Ahmadinejad in 2005.

Kerry said the Bush administration has failed in addressing a number of foreign policy issues.

"When we walk away from global warming, Kyoto, when we are irresponsibly slow in moving toward AIDS in Africa, when we don't advance and live up to our own rhetoric and standards, we set a terrible message of duplicity and hypocrisy," Kerry said.

"So we have a crisis of confidence in the Middle East — in the world, really. I've never seen our country as isolated, as much as a sort of international pariah for a number of reasons as it is today."

Kerry said the government needs to use diplomacy to improve national security.

"We need to do a better job of protecting our interests, because after all, that's what diplomacy is about," he said. "But you have to do it in a context of the reality, not your lens but the reality of those other cultures and histories."

Kerry criticized what he called the "unfortunate habit" of Americans to see the world "exclusively through an American lens."

"I don't care how many troops are put in — Iraq is not going to be pacified," Kerry said. "Now, we are partly responsible. The absence of legitimate significant diplomacy is a disgrace. Quick flights in by a secretary of state are not diplomacy."

"There should be a special envoy, maybe a joint bipartisan special envoy. Why not a President Clinton together with a Republican of high ability, and bring them together and really work the process?"