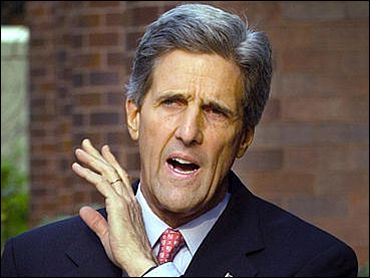 Democratic presidential candidate John Kerry suggested Tuesday that President Bush may have set the June 30 deadline for turning over control of Iraq to interim government for political reasons.

"I think the June 30 deadline is a fiction and they never should have set an arbitrary deadline, which almost clearly has been affected by the election schedule in the United States of America," Kerry told National Public Radio in an interview to be broadcast Wednesday.

Kerry later said he hopes the date has nothing to do with the Nov. 2 presidential election.

Asked what he meant in his statement to NPR, Kerry told reporters: "I mean that I think they wanted to get the troops out and get the transfer out of the way as fast as possible without regard to the stability of Iraq. The test ought to be the stability of Iraq, not an arbitrary date. ... It should not be related to the election."

In the radio interview, Kerry also said it was not wise for U.S. officials to try to arrest Muqtada al-Sadr, an anti-American cleric, without taking other steps to control violence in Iraq. U.S. officials announced an arrest warrant against al-Sadr on Monday, the same day that Mr. Bush reaffirmed his commitment to the June 30 deadline.

President Bush also said al-Sadr is working against democracy in Iraq, but Kerry suggested Tuesday that arresting him would work against efforts to build stability in the country.

U.S. authorities have launched a crackdown on the radical Shiite cleric and his militia after weekend uprisings in Baghdad and cities and towns to the south took a heavy toll in both American and Iraqi lives.

"If all we do is make war against the Iraqi people and continue an American occupation fundamentally without a clarity to who and how sovereignty is being turned over, we have a very serious problem from the long run here and I think this administration is just walking dead center down into that trap," Kerry said.

"As I have said since day one, what you need is to minimize the perception and reality of an American occupation."

"This is another example of John Kerry playing politics with the war on terror," Schmidt said. "The president has made clear that he will not cut and run from Iraq."
On Tuesday, both candidates were campaigning on jobs and the economy.

"There will be jobs. The question is whether there will be people there to fill those jobs," said Mr. Bush during an appearance at South Arkansas Community College in El Dorado, a town of 21,000 people in a region where plant closings and near double-digit unemployment plague the oil, timber and manufacturing economy.

"We want people prepared for the 21st century," Mr. Bush declared, saying that the nation's work force needs to stay on the edge of technological change.

Kerry, meanwhile, visited the battleground state of Ohio, which has lost 170,000 manufacturing jobs since Mr. Bush took office. Kerry said that if elected president he would end tax breaks for companies that move jobs overseas.

The Massachusetts senator said the change would be part of his plan to create 10 million new jobs in this country. Kerry said 1.8 million jobs have been lost since Mr. Bush took office.

"He's created a lot of small businesses in America. The only problem is, they used to be big businesses," Kerry told a sun-splashed crowd during a rally in a city park along the Ohio River.