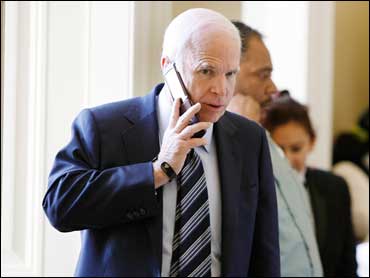 The red-and-blue Senate trolley rolled up to the Capitol basement Tuesday, a lone senator in the front seat checking a piece of paper before slipping it back into his jacket pocket.

"Welcome back," Sen. McCain, someone called out.

"Thank you, good to see ya," came the well-practiced reply as he stepped to the ground.

Then, a more familiar greeting from another senator who had been riding in back.

"John, wait up," called Sen. John Kerry, D-Mass., clapping a big hand on John McCain's shoulder. The pair conferred quietly as they rode up an escalator toward lunch with their colleagues.

Two failed presidential nominees, minus Secret Service detail or much suspense about their futures, back to the Senate - same as it ever was.

Both men plan to stick around for awhile.

McCain decided Tuesday night to set up a political action committee, a step toward running for a fifth Senate term in 2010, an aide told The Associated Press on condition of anonymity because the decision had not yet been made public.

And next year, Kerry will chair the coveted Senate Foreign Relations Committee.

Explicitly or not, Kerry's backslap marked McCain's induction into an unofficial bipartisan caucus of would-be commanders in chief who fell short of the big prize and landed, humbled somewhat, back where they started.

As Kerry and other one-time presidential hopefuls know, a seat in the Senate is a comfy consolation. Aides screen your calls, Senate pages bring lunch and at least 17 colleagues now serving know what it's like to take steps toward White House bids, only to be turned back.

Among them, only Kerry has walked as far down that road as McCain. Kerry captured the Democratic presidential nomination in 2004, lost the general election and returned to Washington stripped of all that had come with it.

McCain's pivot back to life as a senator was abrupt.

Only 24 hours earlier, the Republican had been seated awkwardly next to his former Democratic rival in Chicago, looking out again from a bubble of presidential-level security, surrounded by trappings of a life that might have been his.

Now, the hubbub belonged only to President-elect Barack Obama, who defeated Arizona Sen. McCain two weeks earlier and had invited his vanquished opponent to a bury-the-hatchet meeting. The flashbulbs went off like strobes and media outlets beamed the news around the world.

Back in the clubby Senate, hatchets are presumed buried unless stated otherwise.

Kerry long boasted about his close friendship with McCain, calling it one of the joys of his Senate career. The two decorated Navy combat veterans of the Vietnam War struck up a friendship discussing their war experiences during an overnight flight to the Middle East in 1991.

They grew closer as members of a committee that looked into the fate of prisoners of war in Vietnam, as McCain had been. When tempers flared at hearings, Kerry would calm McCain with a supportive pat on the arm.

And when McCain visited the Hanoi prison where he had been held, Kerry was alongside.

McCain, meanwhile, balked at campaigning against his friend during Kerry's tough re-election fight in 1996.

And famously, Kerry in 2004 toyed with the idea of naming McCain his vice presidential running mate on what some considered a bipartisan dream ticket.

That's when their relationship hit rough terrain. Their campaigns squabbled about who had issued the invitation and what was said. And McCain denounced ads by the Swift Boat Veterans for Truth that assailed Kerry's military record, but refused to let his image or words be used in rebuttal spots.

During this year's election, Kerry emerged as one of McCain's harshest critics, rapping his friend as a flip-flopper on tax cuts and a cheerleader for President Bush.

"He's lurching from one issue to another, from one place to another," Kerry said in a telephone interview earlier this year. "He's talked about having a steady hand on the tiller, but he's had anything but a steady hand."

That sounds harsh, but it's the type of thing often regarded in the Senate as a necessary evil of campaigning that's mostly for show. Kerry, noted his critics, was interested in a Cabinet post in the Obama administration all along.

By the look of the two senators on Tuesday, any strain appears to have eased.

But McCain is still in transition.

He bolted the GOP lunch and headed for the elevators back to the trolley. Standing nearby was a clutch of perhaps a dozen reporters and photographers with their backs to McCain, interviewing Sen. Max Baucus, D-Mont.

Two photographers fired off a few frames, but none of the writers budged when the senator from Arizona slipped silently by them and into the elevator, alone.