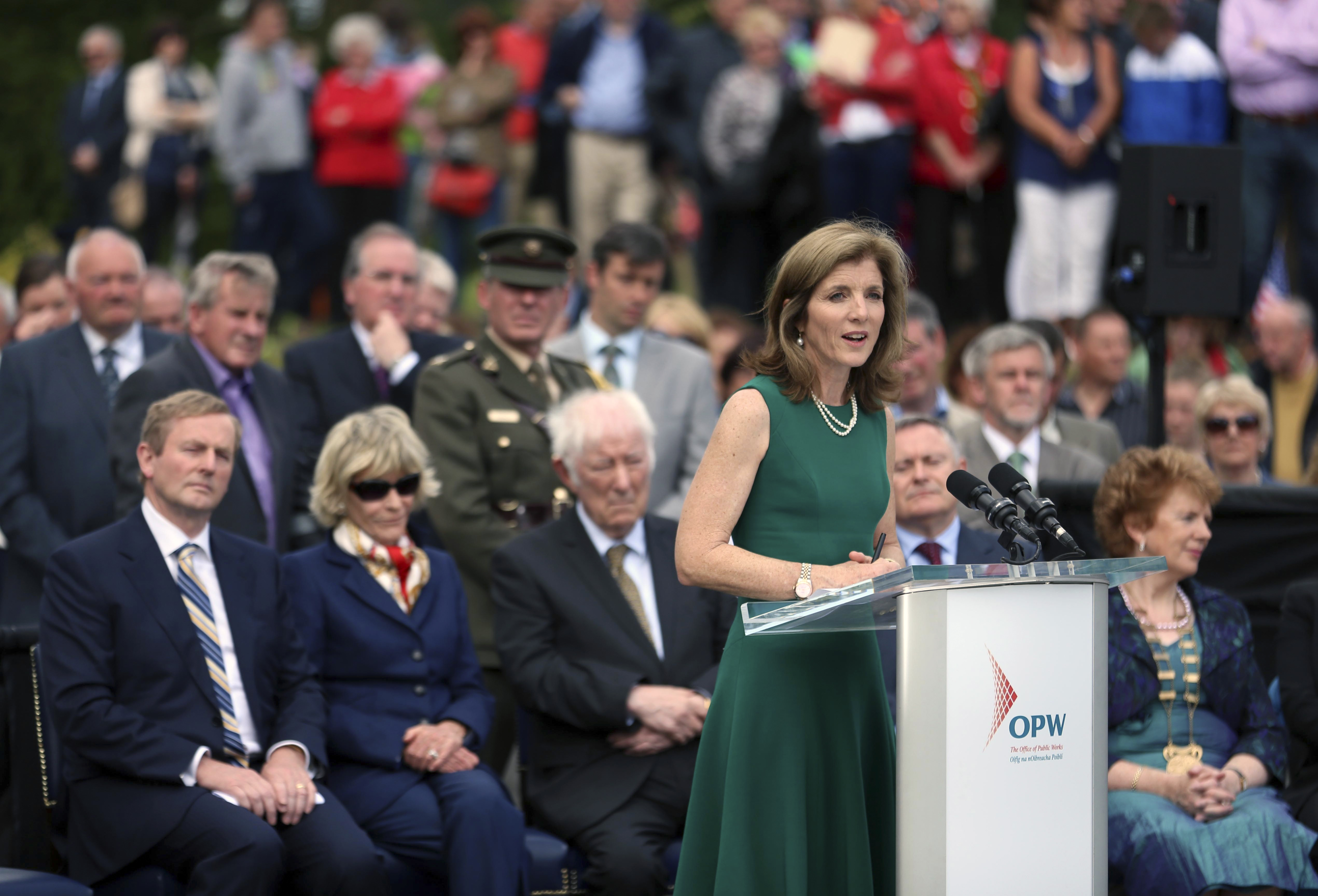 DUBLIN The Irish government and the Kennedy clan celebrated the 50th anniversary of one of Ireland's most fondly recalled moments, the visit of President John F. Kennedy, with a daylong street party Saturday that was capped by the lighting of Ireland's own "eternal flame."

"JFK 50: The Homecoming" celebrations focused on the County Wexford town of New Ross, from where Patrick Kennedy departed in 1848 at the height of Ireland's potato famine to resettle in Boston. In June 1963, his great-grandson John returned to the town as the United States' first and only Irish Catholic president.

During his four-day tour across Ireland, JFK so charmed the nation that, even decades later, his portrait adorns many living-room walls as the ultimate symbol of Irish success in America.

The flame had been carried Olympics-style from JFK's plot in Arlington Cemetery by aircraft to Dublin, then by Irish navy vessel up the River Barrow to the New Ross dockside. It was the first time the Kennedy eternal flame had been passed along in this fashion.

"May it be a symbol of the fire in the Irish heart, imagination and soul," Kenny told more than 10,000 who had gathered along the river bank.

Several members of Ireland's Special Olympics team helped carry the flame from the Irish naval vessel to the ceremony, a gesture to the memory of JFK's sister Eunice Kennedy Shriver, founder of the Special Olympics movement. She died in 2009.

And in a symbolic passing of the family political torch, Caroline Kennedy asked her 20-year-old son, Jack, to handle the main Kennedy part of the ceremony. His polished and idealistic speech reflected his long-expressed hopes to follow his grandfather into U.S. national politics after graduating from Yale.

"We have been told over and over that America is no longer the great country that it was when my grandfather was president," he said, noting that his generation would "inherit a series of problems that previous generations refused to address." He listed rising sea levels, the U.S. national debt, incessant Middle East conflicts and declining U.S. competitiveness as problems that "cynics and skeptics" could never solve.

But he said Ireland's ability to rise from centuries of poverty, emigration and social strife demonstrated that Kennedy-style ambition and optimism could find a home in the 21st century, too. "The glow from this flame can truly light the world," he said.

Earlier, Kenny and the Kennedys rededicated Wexford's Kennedy Arboretum, which was planted following the president's November 1963 assassination, and opened a greatly expanded Kennedy Homestead visitor facility on the ancestral farm that one of JFK's third cousins, Patrick Grennan, still lives on today.

Saturday's flame ceremony featured Irish drummers, an African-American gospel choir, Irish step-dancing star Michael Flatley and folk singer Judy Collins, who at 74 recalled performing for Kennedy in the White House more than a half-century ago. She concluded the event by singing "Amazing Grace" as four Irish Air Corps planes did a fly-past.