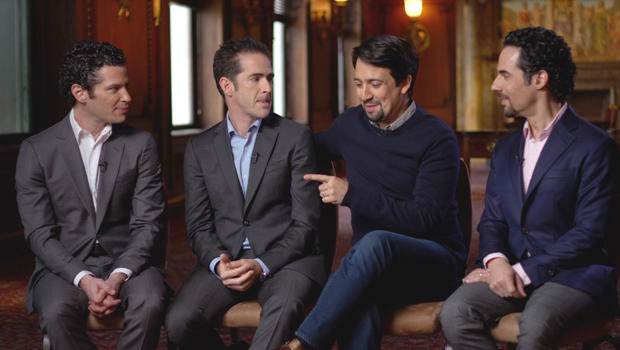 A Broadway show set in revolutionary America is getting new, modern-day accolades. The musical "Hamilton" has joined a prestigious group of artists recently celebrated for their contributions to American culture at the Kennedy Center Honors earlier this month.

The Kennedy Center Honors created a new award this year, honoring the "Hamilton" team as "trailblazing creators of a transformative work that defies category."

"It's the best way to win an award," laughed Kail.

But the four are no strangers to acclaim. Blankebuehler, Kail and Lacamoire collaborated with Miranda on 2005 musical "In the Heights." Miranda, Blankenbuehler and Lacamoire each won a Tony Award for the show, and the 27-year-old Kail was nominated for Best Director.

All four won Tonys for "Hamilton."

"It's not a singular effort," Blankenbuehler told "CBS This Morning" host John Dickerson. "The Broadway musical is based on minds coming together, problem-solving, creating, being inspired."

Dickerson asked. "Where is this collaboration taking place in its various different times?"

"For the few years, it was just happening in my head on vacations," Miranda replied. "And it was like the ghost of Hamilton would be like, 'Hey, write a song for King George,' which got written on my honeymoon.

"And Tommy was like, 'We should start setting deadlines because if you're gonna average a song a year, this is gonna take us a very long time!" he laughed.

At a concert at Jazz at Lincoln Center, Miranda recalled watching Blankenbuehler bobbing his head in the audience and thinking, "Oh, Andy's gonna end up choreographing this!"

Lacamoire said Miranda would then email him demos of songs: "And then I'm like, 'Okay. How do we get a band to play this? How do we get singers to harmonize and chords to support what the melody is?"

Blankenbuehler was asked to describe the way George Washington moves. "Well, I mean, like '"Right Hand Man' is a great example, because 'Right Hand Man' was always supposed to be like Washington stepping out of an oil painting. He's so grand, he's a god to us, and the bullets never hit him."

"I've literally never heard you describe it that way before, which is amazing," Miranda said. "It was exactly pulling Washington down off the oil painting. It was, 'Let's not meet Washington standing, crossing the Delaware and somehow not falling off this tiny canoe!' Let's meet him being like, 'I don't have enough money. I don't have enough troops. And we're losing.'"

Dickerson asked, "How do you not basically get on each other's nerves?"

"Oh, well, I think that we respond to each other's energy in a way that's really positive," Miranda said. "Tommy has a way of setting a room where the best idea in the room wins. And you know, if I bring in a song and I see Andy's already leapt to his feet and Alex is already playing the variations, I'm like, 'Okay, we're pretty far along the course.' If I bring in a song and it's quiet, I go, 'Okay, swing and a miss!'"

Kail said, "My feeling about it is, we all understand instinctively that the stakes can be high and the temperature of the room can be low, and that you can make excellent things with harmony. That this can be proof that it's possible to make something of high quality that didn't result from acrimony or raising your voice. If nothing else, that's one of the things that I hope becomes part of the legacy of the show."

"But was there ever a moment where you thought, 'Gee, a rap about having states' debts assumed by the federal government, that's not gonna fly'?" asked Dickerson.

"Life, liberty and the pursuit of happiness."
We fought for these ideals; we shouldn't settle for less
These are wise words, enterprising men quote 'em
Don't act surprised, you guys, 'cause I wrote 'em!

But Hamilton forgets
His plan would have the government assume state's debts
Now place your bets as to who that benefits:
The very seat of government where Hamilton sits

Lacamoire replied, "I remember the first time Lin brought the demo to me and I heard it, and my first reaction was I couldn't tell if it was trying to be tongue-in-cheek. I was so taken 'cause it was so different. I didn't know what to expect.

"So, it wasn't until a year later until I heard 'My Shot,' and I heard that chant – I am not throwing away my shot – and I started to see, 'Oh, my God. Lin is dead serious about this.' And it really started to fill me with something. I never pictured the founding fathers with this kind of energy, with this kind of passion and drive."

For Miranda, Hamilton's life and his words seem handmade for the stage, and he feels lucky that he got to tell the story.

"I couldn't believe it hadn't been told in this form," he said. "It seemed like someone else would've had this idea already. I'm really grateful that I found the right collaborators to help get it out of my head and get it out of the void into the world."