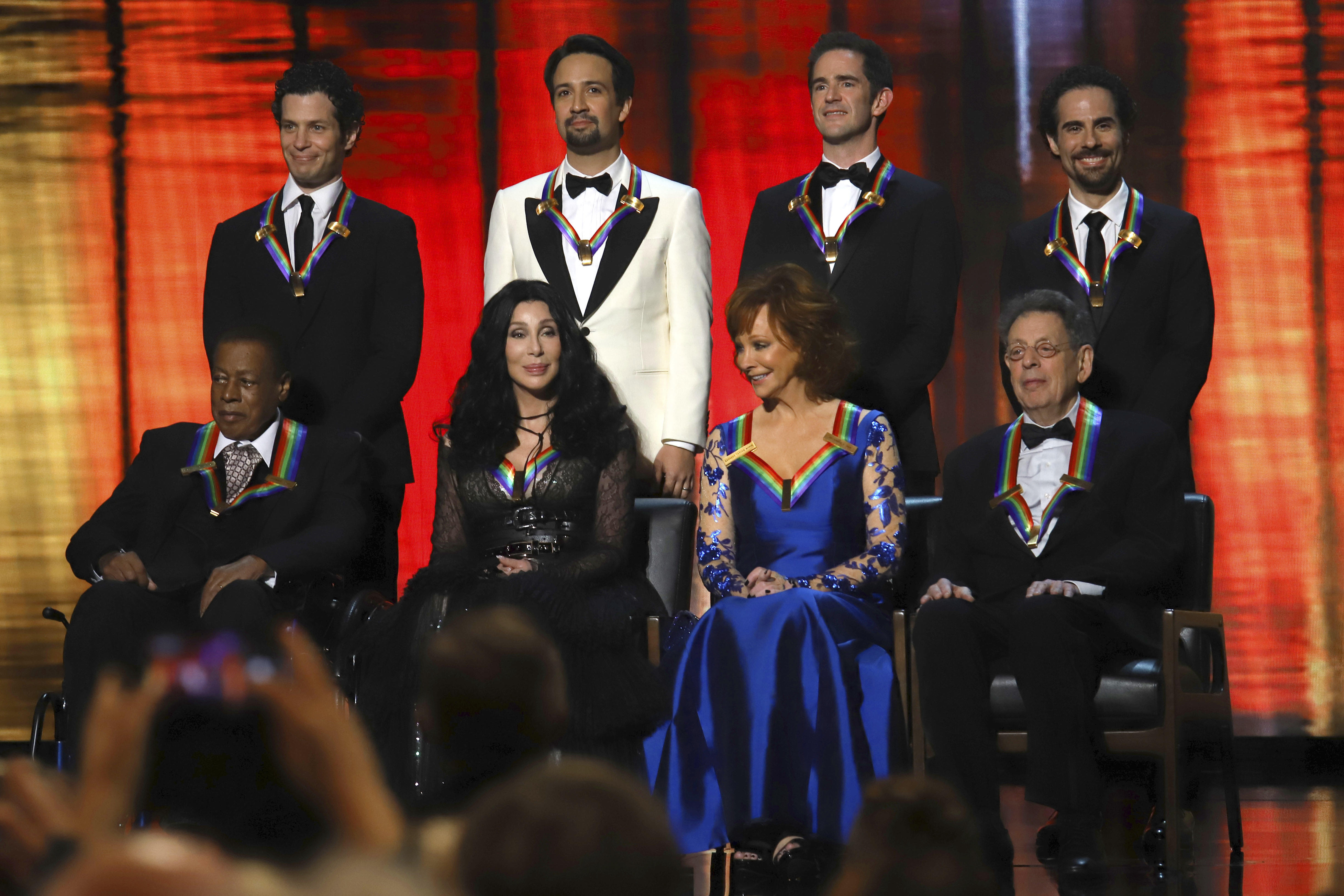 The night kicked off with an extended standing ovation in Bush's memory at the request of hostess Gloria Estefan.

"I think it's appropriate to recognize the passing of a wonderful man who dedicated his life to service and who graciously attended this event many times during his administration, laughing, applauding, singing along and even shedding a tear from right up there in the presidential box," said Estefan, who recalled being invited to the White House and how Bush "literally spent 45 minutes patiently talking to my eight-year-old son" about how the government worked.

Within days of that White House visit, Estefan's tour bus was in a serious accident that left her nearly paralyzed and President Bush called her in the hospital, she said.

For the second straight year, President Trump and first lady Melania Trump declined an invitation to the awards. They returned to Washington before dawn Sunday from the Group of 20 summit in Argentina.

The Trumps skipped last year's ceremony after several of the honorees - most notably leftist television producer Norman Lear - threatened to boycott if he attended. This year, nobody issued that kind of overt threat, but the Trumps still announced three weeks ago that they wouldn't attend.

David Rubenstein, the chairman of the board for the Kennedy Center, said after intermission that he often thinks about the values Bush brought to public service.

Bush attended the Kennedy Center Honors for most years during his presidency - and even afterward, during his son's presidency - but like other leaders, he was pulled away by major issues that demanded his time. Bush didn't attend in 1989 because he was at a summit in Malta. Jimmy Carter missed the 1979 awards because of the Iran hostage crisis. Bill Clinton was on his way to a conference during the 1994 Kennedy Center awards.

Mr. Trump, however, is the first president to miss them twice.

Had he gone to the Kennedy Center, he might have faced opposition from at least some of the honorees, including Cher and Lin-Manuel Miranda (who was also honored with a star on the Hollywood Walk of Fame).

Trump and his administration have put unprecedented distance between themselves and the arts and science communities. No arts or humanities medals have been announced or handed out since September 2016, when Barack Obama was president - the longest gap by months since the awards were established in the mid-1980s.

This year's honorees for lifetime achievements in the arts were Cher, composer Philip Glass, country music legend Reba McEntire and jazz icon Wayne Shorter. An unprecedented special award went to the co-creators of "Hamilton" for their genre-bending musical.

"Sometimes when we meet our heroes, it doesn't always pan out," Clarkson told McEntire, "but my friendship with you became one of the highlights of my life."

Shorter was hailed by the Kennedy Center for a six-decade career that included collaborations with Art Blakey, Miles Davis, Carlos Santana and Joni Mitchell.

"His sound holds a special place in the galaxy," Moran said. "I can safely say that somewhere in the galaxy right now, a band is playing one of his pieces."

"He can rightfully be described as one of our greatest modern composers," Simon said.

Simon praised Glass for his eclectic body of work, "never settling into one particular style, always developing and exploring."

This year's event contained a break from tradition by honoring an actual contemporary work of art - the blockbuster musical "Hamilton" - in addition to lifetime achievement awards for late-career artists. Writer and actor Miranda, director Thomas Kail, choreographer Andy Blankenbuehler and music director Alex Lacamoire were honored as "trailblazing creators of a transformative work that defies category."

Comedian Whoopi Goldberg kicked off a tribute to Cher in a flowing sparkly gown that she joked came from the pop music icon's closet.

"She is the true original," Goldberg said. "She not only marched to the beat of her own drum - honey, she is a one-woman band!"

The evening ended with Cyndi Lauper, a longtime friend of Cher's, performing "If I Could Turn Back Time."

The Honors tribute performers are always kept secret from the recipients, and this was no exception. When Lauper appeared, Cher yelled from her seat, "You told me you were going to Los Angeles!"