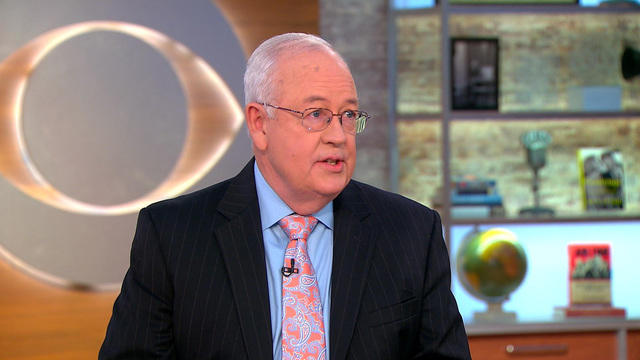 Former independent counsel Ken Starr, whose probe of President Bill Clinton and his affair with White House intern Monica Lewinsky led to Mr. Clinton's impeachment and near-removal from office, says in a new book that he regrets the turn his investigation took.

In "Contempt: A Memoir of the Clinton Investigation," Starr writes, "I deeply regret that I took on the Lewinsky phase of the investigation. But at the same time, as I still see it twenty years later, there was no practical alternative to my doing so."

Appearing on "CBS This Morning" Monday, Starr was asked what parts of the Lewinsky investigation he regrets today?

"I regretted the whole thing," Starr said, "but it had to be done. When the information came to us that the president of the United States may have been in the process of committing perjury, obstructing justice, we went to the attorney general of the United States, Janet Reno. She agreed, and so the rest is all history."

Since the Starr investigation, Lewinsky faced years of harassment on the internet, and would become an advocate in the fight against cyberbullying.

"Monica Lewinsky has said the release of the Starr report was one of the worst days of her life," Co-host Norah O'Donnell said. "She wants an apology. Will you apologize to her?"

"No. I won't because, unfortunately, the facts are the facts, and we were put in the position that under the statute in which I was appointed I had a duty, I had a responsibility. I will say and I've said it many times, I regret all the pain that resulted to so many, including to the nation. Of course I regret that. But no, I can't in conscious say to Monica anything other than I'm sorry that the whole thing happened."

Starr's office had been alerted to the president's affair by a former White House staffer, Linda Tripp, who had been a witness in the investigation into the death of Deputy White House Counsel Vince Foster, who was found dead in July 1993. His death was ruled a suicide.

"Linda was the last person in the White House who we know to have seen Vince Foster alive before he took his own life in Fort Marcy Park," said Starr. "And so, she came to us with this information that she was being asked to file a perjury written affidavit. That's how it began."

O'Donnell asked, "So, when you hear that a woman has information about an alleged affair [with] the president you're investigating on Whitewater, do you say, 'We don't need to investigate that? That's not relevant?' What was going through your mind in terms of investigating it?"

As recounted in Starr's book, prosecutors questioned Lewinsky after Tripp had secretly recorded phone conversations with her. In an operation they dubbed "Prom Night," FBI agents interceded with Lewinsky and Tripp at a hotel where they'd arranged to meet for lunch. The two were then taken to adjoining hotel rooms, where Tripp was questioned, and Lewinsky was offered the choice: cooperate or face perjury charges.

Co-host Vladimir Duthiers asked, "Why was a sting operation necessary?"

"It wasn't a sting operation," said Starr. "What it was was simply a mechanism of trying to confirm what we thought we knew. And we did know it – these were, in fact, the facts – and to give her the opportunity to cooperate with the investigation.

"Had she cooperated, this entire matter would have been wound up in a matter of several weeks, and the nation would have been spared all of this. So, we treated her with dignity, we treated her with respect, and said, 'Here is the possibility: You can cooperate with the investigation, which has been authorized by the attorney general  … now please cooperate and let's get this over with.'"

Instead, Lewinsky conferred with her family and, in Starr's words, "lawyered up."  The investigation continued.

O'Donnell said, "Supreme Court nominee Brett Kavanaugh worked on your team, worked on this investigation of President Bill Clinton; he wrote and suggested some very explicit salacious questions should be asked of President Clinton, but you didn't agree to do that. Why?"

"Well, we wanted to respect the dignity of the presidency, and I think that we did that," Starr said. "But we at the same time had to get to the bottom of things. We asked all the prosecutors, 'What should we ask?' It was a deliberative process."

Starr's report of his investigation into President Clinton was released in September 1998, containing what Starr considered to be impeachable offenses, including obstruction of justice, perjury, and abuse of the office of the presidency. The Republican-majority House of Representatives initiated impeachment proceedings, and on December 19 voted to impeach Mr. Clinton on two charges. The president would later be acquitted by the Republican-led Senate, which failed to get a majority to vote guilty on either charge.

"Contempt: A Memoir of the Clinton Investigation" by Ken Starr (Sentinel), available via Amazon

To watch the full interview with Ken Starr click on the video player below.