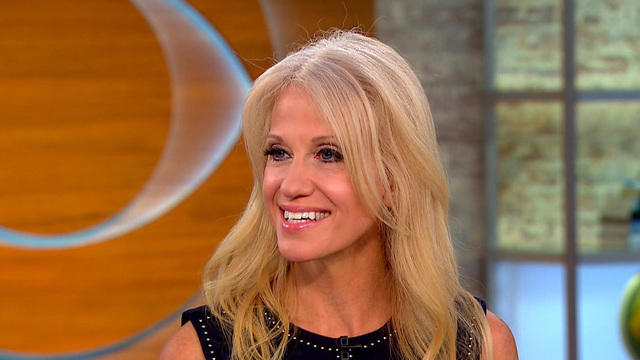 A day after officially taking on the mantle of Donald Trump’s campaign manager, Kellyanne Conway, a longtime Republican operative, joined “CBS This Morning” to discuss the direction of the troubled campaign with less than 12 weeks to go until the general election.

“I think it’s important to make sure that internally, our structure is sound, that people have the equipment, the tools they need,” Conway said Thursday, when asked what her role would be in the campaign. “I’m a big believer in retail politics, I’ve seen it work many times.”

Of the recent campaign reorganization, Conway maintained that it was an “expansion” more than it was a shakeup.

“We look at it as an expansion at a critical and busy time for the campaign,” she said. “When it comes to personnel and it comes to senior-level staff, more is more -- the more big minds, and broad shoulders we can get inside the door.”

When it comes to who is ultimately making the final decisions, Conway said: “I’d say it is a combination of us. And Donald Trump has made it very clear who it is.”

Trump announced the campaign promotions early Wednesday morning, after a week of plunging poll numbers and controversies surrounding campaign chair Paul Manafort and his connections to foreign firms. Manafort, according to Conway, “is still there as chairman and retains his title.”

Conway emphasized her own focus on issues, rather than the tone and style of the campaign, promoting Trump’s past few days as a “tremendous messaging week” with a “very muscular” anti-terror speech earlier.

“I’d rather lose a campaign that we put it all on the field substantively... than win a campaign based on style,” she said. “If this is about style he can go back to ‘The Apprentice.’ That was really fun and successful and lucrative for him.”

“I am confident he can stay on message,” she said.

She added in a barb about Trump’s Democratic rival, Hillary Clinton.

Conway added that the “way to speak to women and all Americans is through issues. We have to get away from the content-free campaign and on to the substance and talk to the people who are struggling.”

She also fired back at Clinton over her recent “disappointing and unbecoming” attacks on Trump, when the Democratic nominee charged that Trump would never change no matter the different words on his teleprompter.

“For somebody who wants to be commander-in-chief of our armed forces, she’s literally reading from something somebody else wrote and said, ‘well they can get him to read different words from a teleprompter,’” Conway said. “There’s not a single job that gets created, not a single uninsured American who gets health care from that kind of nastiness.”

Conway also addressed the intelligence briefing Trump attended Thursday, on the heels of a television interview where the candidate said he did not trust U.S. intelligence sources.

“I can’t disclose that,” she responded. “I can tell you he took it very seriously and very much appreciated being there.”

Rose attempted to clarify: “You can’t disclose whether he believed it or not?”

“No, about the details,” Conway said.

“I’m not asking about the details,” Rose replied. “Did he believe the intelligence report that the CIA prepared for him?”

“Yes, he did,” she said. “When you say ‘believe,’ he certainly is taking it very seriously and digesting it and nobody looks at something that complicated in one sitting. So this will be ongoing.”

Rose’s question followed up on a Fox News interview Tuesday night in Milwaukee, when Trump was asked whether he trusted U.S. “intelligence.”

One year after Hawaii volcano erupted, residents are still "tense"

Ex-pickup artist reveals struggle with monogamy in "The Truth"