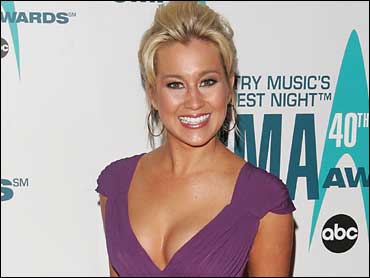 Life for Kellie Pickler has definitely changed since she competed on "American Idol" last year.

The beauty school dropout from Albemarle has moved to Nashville, Tenn.; released an album; and was nominated for a new female vocalist award at the Academy of Country Music Awards.

And those plastic surgery rumors?

"Oh, my boobs? I don't care," the 20-year-old singer told WCNC-TV in Charlotte recently. "You know what? The most important thing is you're happy with what you see when you look in the mirror."

Pickler, who has been touring with Brad Paisley, said she's happy with herself and believes what's important is on the inside.

She's not in a serious relationship, Pickler said, but does have her eye on an unnamed Nashville hockey player.

"Everyone always says we're the 'hockey-tonk hookup' or whatever in Nashville. It's kind of cute," she said. "He has introduced me to so many different types of food. I've been eating raw fish. It's kind of weird. I ate eel the other day."

Pickler said she wants to start a family someday but she's not planning to settle down anytime soon.

"If it's meant to be then it will happen," she said. "If not, then I'll just be an old hag that lives by herself with a bunch of cats."