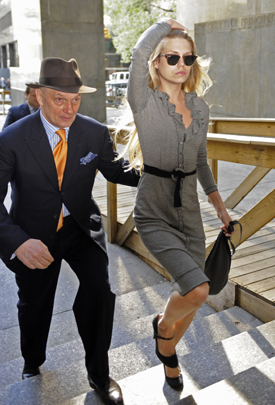 Theodora Richards, 25, was arrested after getting caught writing the letters "T" and "A" with a heart symbol on the side of a Manhattan building. (There's a song on the 1981 Rolling Stones album "Tattoo You" called "Little T & A" and sung by her father. Coincidence?)

Police also found marijuana and eight-and-a-half hydrocodone pills in her purse. She has until June to complete her community service.

Richards showed up to court wearing a striped gray-and-white shirtdress and high heels. She has modeled for Burberry and Tommy Hilfiger.