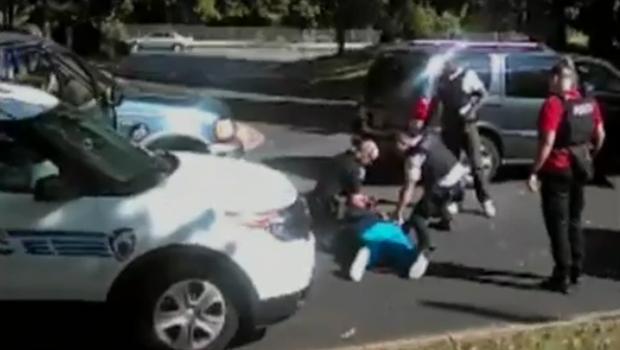 CHARLOTTE, N.C. The black man killed by Charlotte police had a restraining order filed against him a year ago when he threatened to kill his wife and her son with a gun, according to court documents obtained Tuesday.

Keith Scott’s wife filed the order on Oct. 5, saying that law enforcement officers who encounter him should be aware that he “carries a 9mm black” gun. Police have said Scott had a handgun when they approached him at an apartment complex last week. Officers told Scott repeatedly to drop the weapon and he was shot to death when he didn’t follow their orders, the Charlotte-Mecklenburg police chief has said.

Scott’s family has said that he was not armed. Videos released by police and the family are inconclusive, and state authorities are investigating. Over the past week, sometimes violent protests have erupted, and the police headquarters building had to be evacuated Tuesday as a bomb squad checked out a suspicious package.

The package was removed Tuesday night and taken to a remote location to be rendered safe, police said, adding that more testing was needed to determine exactly what the package contained.

“He kicked me and threaten to kill us last night with his gun,” she said in the order filed in Gaston County, where the couple then lived. “He said he is a ‘killer’ and we should know that.”

Rakeyia Scott checked boxes on the form informing law officers who would serve the restraining order that her husband had neither a permit issued by a county sheriff to buy a handgun nor a state permit to carry a concealed handgun, which requires a criminal background check. She said he worked as a mall security guard.

When deputies went to serve the restraining order two days after it was filed, Scott had already moved to South Carolina, where he has family. About a week after that, Rakeyia Scott filed a separate court notice voluntarily dismissing the order, saying: “He is no longer a threat to me and my family.”

In a video released last week capturing the moments before and after Scott was shot by police, Rakeyia Scott can be heard telling officers: “Don’t shoot him! He has no weapon.”

CBS affiliate WBTV​ has uncovered two separate restraining orders that Keith Scott’s wife, Rakeyia, has filed against him since 2004.

The first was filed in Mecklenburg County in April 2004.

According to court documents, Rakeyia Scott said Keith Scott “assaulted me several times by stabbing me in the back, almost puncturing my lungs, he sliced me [sic] ear and bruised my body.”

The incident reportedly happened in an apartment the couple and their children shared along Paces Glen Avenue in east Charlotte.

According to the paperwork, Scott had a pattern of prior conduct which included making threats to seriously injure or kill Rakeyia and had inflicted serious injuries against her. She didn’t check the boxes indicating that she believed the couple’s children to be in danger.

According to court documents obtained by WBTV, he was extradited to Texas later that year to face charges after he shot and injured a man in San Antonio, Texas in 2002.

Scott was convicted of aggravated assault with a deadly weapon. He fired more than 10 rounds from a 9-millimeter pistol during the incident, a spokesman for the Texas Department of Criminal Justice confirmed to WBTV’s newspaper partner The Charlotte Observer.

He was sentenced to seven years in prison for the assault and for subsequently trying to evade arrest. He was booked in prison in August 2005. Documents show that he unsuccessfully petitioned the court for a sentence reduction, arguing that he was acting in self defense and trying to protect his family.

In October 2015, Scott’s wife, Rakeyia, filed for a second restraining order against him - this time in Gaston County. In her petition, she said that law enforcement officials should consider her husband a potential threat because he carried a 9-millimeter gun.

Charlotte-Mecklenburg Police said they found Scott’s DNA and fingerprints on a handgun recovered at the scene, and that he was wearing an ankle holster when he was killed.

Police released a photo of a small, black handgun they said was recovered from the scene of Scott’s shooting on Sept. 20. Police have not described the gun in detail, but printing on the side of the barrel said it was a Colt Series 80 Mustang .380 caliber, which shoots a 9mm bullet, according to Steven Howard, a firearms consultant in Lansing, Michigan, who has testified as an expert witness in court cases.

It’s not clear if the gun mentioned in the restraining order is the same one police said they recovered.

The gun recovered by police had been stolen and later sold to Scott, a Charlotte-Mecklenburg police source told The Associated Press on Monday. The person insisted on anonymity because the State Bureau of Investigation is looking into the shooting.

State agent Erik Hooks declined comment when asked whether the gun had been stolen.

Corine Mack, president of the local NAACP chapter, said Scott’s legal history didn’t matter because officers didn’t know any of it before he was shot and blacks typically are “demonized” after being killed by police.

“I don’t want to hear any of that,” Mack said at a news conference announcing demands that include implementation of police reforms approved last year.

Police Chief Kerr Putney has said officers were looking for another suspect when they spotted Scott with marijuana and a gun in an SUV and decided to engage him.