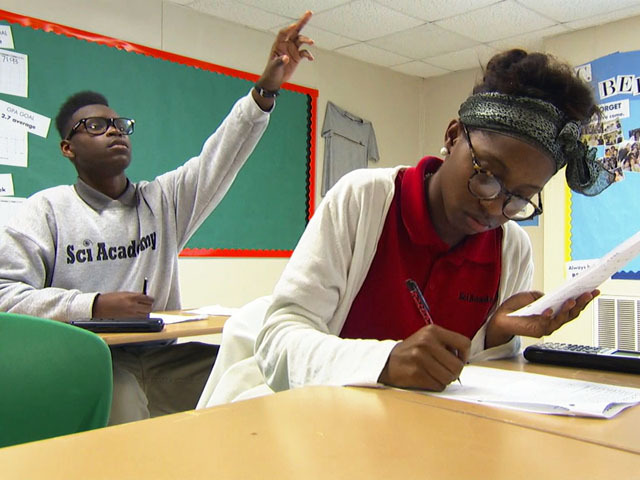 But in catastrophe, there was opportunity. One of the biggest was recreating a school system from scratch. We asked Mayor Mitch Landrieu about that Friday.

SCOTT PELLEY: Paint the picture for me. What was the New Orleans school system the day after Katrina?

MITCH LANDRIEU: It was gone. It never existed. Every building was under water. But what also happened was structurally, in terms of governance, it just disappeared. Everybody that worked for the system didn't exist anymore, in terms of the jobs that were there or the schools. And we had to piece it back together.

They pieced it back, not as the traditional school system it was, but as a charter school system with teachers and principals hired, fired and promoted based on merit and parents given the freedom to choose schools they like.

LANDRIEU: One of the things that we had the ability to do was to actually physically rebuild every school with FEMA reimbursements and with other money. Now, we didn't put the school back like it was. We built a 21st century, state-of-the-art, knowledge-based school.

PELLEY: You've been doing this a little over five years. What have you accomplished?

LANDRIEU: What's happening now is the achievement level of the kids in the inner city is now beginning to match the kids on the statewide level in a very, very short period of time. And finally, if you go into any charter school in New Orleans right now, and you ask a kid when is he going to graduate, what he tells you is when he's going to graduate from college. And so they really have their eyes focused on, "I've got a future ahead of me. I intend to finish school. I don't intend to drop out."

Simone Smith has applied to 13 universities. She's a senior who chose to go to a high-performing science school called Sci Academy.

PELLEY: What are the dreams?

SMITH: I want to be an actress, an attaché, hopefully one day secretary of defense. Yeah, I've got big dreams.

PELLEY: That's a lot of dreams.

Before Katrina, the graduation rate was less than 50 percent. Now it's more than 75 percent. Test scores are up 33 percent.

PELLEY: What did it mean to you to be able to pick the high school that you went to?

SMITH: It meant everything. I don't think I would be here if I wasn't able to pick the high school that I wanted to go to. Because I don't feel like you can be truly educated without having a choice. I think having a choice is kind of education.

Mayor Landrieu gave great credit to the Teach for America program, which sent 375 teachers from all over the country to New Orleans.