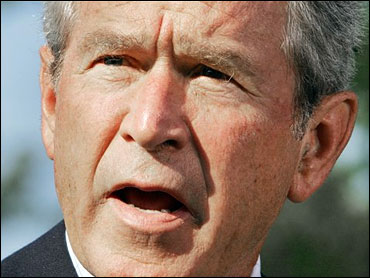 After the Sept. 11 attacks, the newly elected President Bush needed to be seen as a strong leader. He gripped a bullhorn at Ground Zero in New York and bellowed to rescue workers: "I can hear you! The rest of the world hears you!"

In the wake of Hurricane Katrina, Bush — a two-termer shouldering the lowest approval ratings of his presidency — is struggling to prove he can manage a national disaster that will burden his administration for the rest of his time in the White House.

If Sept. 11 was the defining moment of his presidency, Katrina is again testing his mettle as a crisis manager.

Failing that test will mar his legacy.

Criticized for being slow to respond to the hurricane, Bush has, in recent days, traveled to the region and stepped up to the microphone repeatedly to convince the nation that his administration is on top of the devastating situation.

Delivering his weekly radio address live from the White House on Saturday, Bush announced he was deploying more than 7,000 additional active-duty troops to the region. He comforted victims and praised relief workers.

"But despite their best efforts, the magnitude of responding to a crisis over a disaster area that is larger than the size of Great Britain has created tremendous problems," he said, squinting in the bright sunshine in the Rose Garden, a backdrop that adds gravity to anything any president utters. "The result is that many of our citizens simply are not getting the help they need, especially in New Orleans, and that is unacceptable."

Had the horrors of the Gulf area been followed by an immediate, massive movement of aid and troops, Bush might have avoided much of the critical backlash.

"That would have been a big plus for the president," Ornstein said. "You get the blame when you're the top dog. And in this case, I think there is no doubt that we had inadequate preparation and we've had inadequate response."

In the president's defense, the White House insists that there has been a massive, round-the-clock federal response to assist the victims of the hurricane. At the same time, it says there are ongoing problems that need to be addressed.

"The president is not going to be satisfied until they are," presidential spokesman Scott McClellan said Saturday.

McClellan said the president has seen firsthand the devastation and heard directly from some of the thousands displaced from the region. "Those who are suffering need help now," he said. "All of us coming together to solve the problems is what those who suffer need, not finger-pointing."

By any measurement, the tragic hurricane is not a redo of Sept. 11. After the 2001 terrorist attacks, Americans rallied around the president. With the hurricane, the people will rally around those who are suffering. And unlike Sept. 11, Bush's words might not be enough to calm anxieties and paint him as a crisis manager-in-chief.

The terrorist attacks occurred only months after Bush was elected in the contested 2000 election. The expectations of Bush were lower than now, after he's been in office for more than four years, said Kathleen Hall Jamieson, director of the Annenberg Public Policy Center.

"When he did very well in New York, he looked as if he'd done extraordinarily well," Jamieson said. "Now when he does well, we think it's inadequate."

Now, anything Bush says is judged against his ability to govern the nation, not against the promises of a candidate.

"It's hard to find the right rhetoric because he's carrying the baggage of governance and his accountability for the lack of preparedness," Jamieson said. "It's not that empathy doesn't have some traction. It's just that when you're watching television and his empathy is pitted against anger, the anger wins."

Some of the most blistering attacks have come from New Orleans Mayor Ray Nagin. Earlier in the week, Nagin wondered if the city could survive another night and who the stranded residents could depend on to help them. Breaking down into tears and anger, he lashed out at government officials.

After meeting with Bush on Friday, Nagin said he was confident that the administration was answering his SOS.

While the angry words from the mayor have been tempered, Bush still will be judged less on his rhetoric and more on his performance as a manager. Either way, however, his approval rating, below 40 percent in some polls, might not budge.

"After 9/11, people thought Bush's responses were just right and his ratings soared. It's just not clear that that's the case here," said Karlyn Bowman, a public opinion analyst from the American Enterprise Institute. "The views about this president are pretty hard right now, so I don't think we'll see a significant change. They're pro or opposed to him. The country is deeply divided."