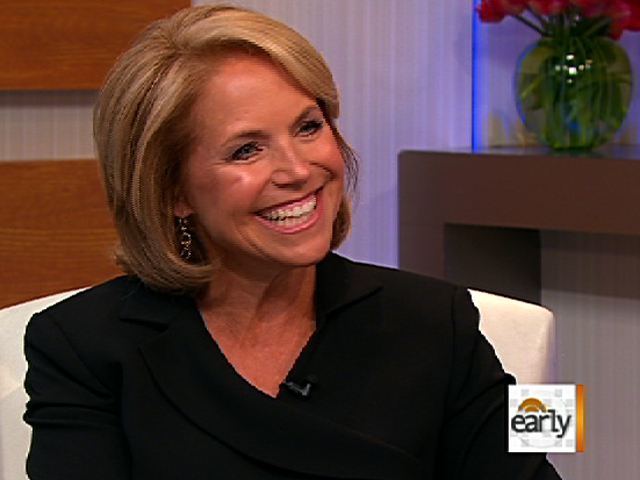 Katie Couric, anchor and managing editor of the "CBS Evening News," has, over the course of her illustrious career, interviewed countless fascinating people. She's asked 116 of them about advice that changed their lives. The result is her new book: "The Best Advice I Ever Got: Lessons from Extraordinary Lives."

Couric said the idea for the book came from a graduation address.

"I do graduation addresses pretty frequently. I take them seriously. It's a big responsibility," she said. "You want to leave the kids - if they're not too hungover to listen - with some piece of advice. And I'm tired of talking about myself, blah, blah, blah. So I decided to reach out to some of the ... people I've interviewed through the years and had gotten to know a bit ... [and asked them,] 'What would you tell young people going out in the world, especially in the tough economic times.' They wrote back really beautiful things. And I thought, 'Wow, this is going to be wonderful to put in a book' to sort of cast a wide net and to see if all of the people who had lived extraordinary lives could share some of their secrets, some of what happened to them. And I thought it would be really helpful to people, not only graduating from college, but from all of us. I thought, 'Well, if I'm loving reading them, other people might as well.' So I've written the introduction and we got, as you said, 116 people in all."

"Early Show" co-anchor Erica Hill remarked that Couric's forwards to each chapter are very personal - more personal than many people may have expected.

Couric responded, "I wanted to share in some of the things I learned along the way. I had a life that I never in a million years imagined - both in highs and terrible lows, losing my husband and sister, for example. So I really wanted to share things that I've learned along the way. I thought it was only right. I'm asking these people to bare their souls that I kind of express myself, as well. In every chapter, it may be the bank of experience, the importance of hard work and tenacity. I talk about how I learned that lesson or trying to give to something greater than yourself. A lot of people wrote about that and the importance of courage and moxy and kind of letting them know you're there like my mom told all her kids to do -- 'let them know you're there.' That's how the book is formatted. It works pretty well."

Hill noted famed chef Mario Batali wrote the first life lesson in the book: "Life is not a recipe."

"He's so great," Couric said. "He wrote the best essay. He talked about how he learned at a restaurant called Stuff Your Face and while he was the student at Rutgers (University, he learned) the importance of cleaning the deep fat fryer. It became the metaphor for his life. If you cook in a dirty fryer, you cook garbage. He's talking about purity and listening to your own personal truth and expressing it consistently. That's how he came up with his particular brand and the importance of it really being about truth and heart. He wrote something great, I think."

"I love her so much," Couric said. "I love her as a person. I interviewed her on the first show. I'm full of love today. So she wrote about the fact that she was rejected 60 times by publishers and she kept at it. Her husband said she never gives up. And when she was about to give birth, she was rewriting the last chapter and the nurse said, 'Put the book down, you nut job, you're crowning.' She used to lie to her husband and say she's going for a girls' weekend and she would go to the Comfort Inn to write."

"Exactly," Couric said. "Can you imagine if she had given up after 35 rejections which most people would, we would never have this wonderful book."

Other notable essays in the book include Whoopi Goldberg speaking about The Golden Rule.

"She wrote a great essay," Couric said. "I'm so appreciative to her. ... (Her advice is) similar to what a producer told me when I got the job on the 'Today' show: 'Listen, kid, today you may be drinking the wine, tomorrow, you could be picking the grapes.' That said to me, 'You know what? You have to be good to the people all along the way.' Because the people who cheer you along when you succeed are the ones that are going to catch you when you fall."

Co-anchor Erica Hill pointed out Couric has a lot of changes in her life. She said Couric's contract is up at CBS.

Hill said, "As you figure out what the next step is for you, whatever it may be, is there anything that stood out to you as advice to help you make that decision?"

Couric answered, "I think, you know, sort of listening to your inner self. I think a lot of people talked about that. And Michelle Kwan talked about learning to get up when you fall. I don't feel like I've fallen. But the importance of being persistent and continuing on a path and being true to what makes really you happy, finding your passion. Yeah, you know, I love to talk, obviously. ... I think I love to be my authentic self. It served me well over the years. I'm looking for a place that I can really be me and hopefully that will bring me the fulfillment I'm looking for."

She added, "But I love my job. And I really found a lot of satisfaction doing 'Evening News' and I'm really proud of the team and all we've accomplished. So I don't want to say that I'm not proud of this chapter in my life either - speaking of books."

Couric's profits from book sales will be donated to Scholarship America, a nonprofit scholarship and educational support organization founded in 1958 that has made it possible for more than 1.7 million students to go to college.