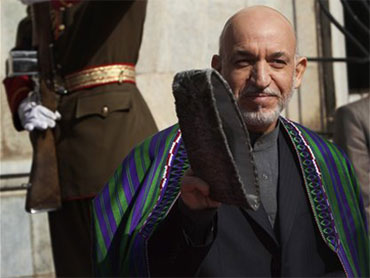 Afghanistan's president says he wants people from "all parts of the country" in his government.

President Hamid Karzai told reporters Tuesday that he will welcome anyone from the opposition into his government and will institute reforms to stamp out corruption.

On Monday, he won a drawn-out election by default following a first-round vote that was marred by fraud. Election officials proclaimed Karzai the winner of the runoff after his only challenger dropped out saying that the election could not be free or fair.

His former challenger, Abdullah Abdullah, has said he will not join Karzai, but the two have been negotiating privately about ministry seats or accommodating Abdullah's platform in some way.

Contacted by CBS News on Tuesday, after Karzai's speech, Abdullah's campaign would not shed any new light on the extent to which they might cooperate with the president.

Abduallah spokesman Faazel Sangtharaki told CBS News' Fazul Rahim they "weren't surprised" by the Afghan election commission's decision to declare Karzai victorious, as the election itself had been "handpicked" by the president. Santharaki said the campaign would have more to say on future cooperation at a news coference on Wednesday.

Asked Monday by CBS News correspondent Mandy Clark whether Mr. Obama has a viable partner in Karzai, Abdullah said he would leave that to the U.S. leader to determine for himself.

"The United States has experience dealing with the same partner for the past few years," Abdullah said. "It is what it is."

Mr. Obama made an unavoidable phone call to congratulate Karzai on Monday, but also used the conversation to convey to the Afghan leader that now was a time for change.

"I emphasized that this has to be a point in time in which we begin to write a new chapter," Mr. Obama said in describing his phone call. President Obama said that when Karzai offered back assurances, he told him that "the proof is not going to be in words. It's going to be in deeds."