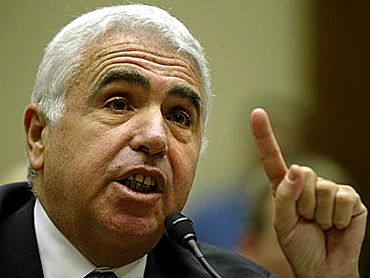 Karmazin became president and COO in May, 2000, when Viacom bought CBS. He had taken over CBS in 1997, by merging his company, Infinity Radio, into CBS and bringing his "genius" — as many people put it — in the business of selling advertising to CBS, reports CBS News Correspondent Dan Raviv.

But at Viacom, Karmazin had to share power with Sumner Redstone, the chairman and chief executive officer who made Viacom one of America's biggest media companies, owning, among other things MTV, Nickelodeon, Paramount Pictures, and Simon & Schuster publishing.

Redstone, 81, and Karmazin, 60, reportedly did not get along. Some people in the company said there was a "power struggle;" and when that happened in the past, Redstone always was the winner.

In a statement, Redstone said Karmazin "leaves with an extraordinary track record of accomplishment."

"We very much regret Mel's decision to resign and we wish him well," Redstone added.

He said Karmazin would stay on as a consultant for two months to help with the transition.

In announcing the change, Viacom described it as "part of a corporate succession plan, which will provide for the orderly transition to the next generation of senior management."

As part of that plan, Viacom said Redstone has indicated that he will relinquish his role as CEO within three years.

One eventual successor might be Redstone's daughter, Shari Redstone, 50. Until now, she has focused most of her attention on running National Amusements, her family's privately held movie theater chain based in Boston. However, she has said she plans to spend a third of her time at Viacom starting in the fall.

"It was always my intention that when the kids were grown, I would spend more time and play a more significant role at Viacom," Redstone said told The New York Times in a recent interview. "Next year is the year I intend to start attending meetings more regularly."

Under his unusual employment contract, which was signed last year, he has full operational authority and can leave with a full payout if Redstone overrules him on matters of strategy.

Karmazin stands to get close to $25 million in salary, deferred compensation and bonus, according to the details of the agreement, which was made public in regulatory filings.

In addition, Karmazin holds nearly 11 million shares in Viacom, including options, which are worth more than $400 million based on recent share prices.

Karmazin might take a hiatus from the industry, but he might give in to the offers likely to come his way — including one from Disney, whose board is weighing succession plans for CEO Michael Eisner.

In their new roles, Freston and Moonves will jointly oversee all of the operations of Viacom and report to Redstone.