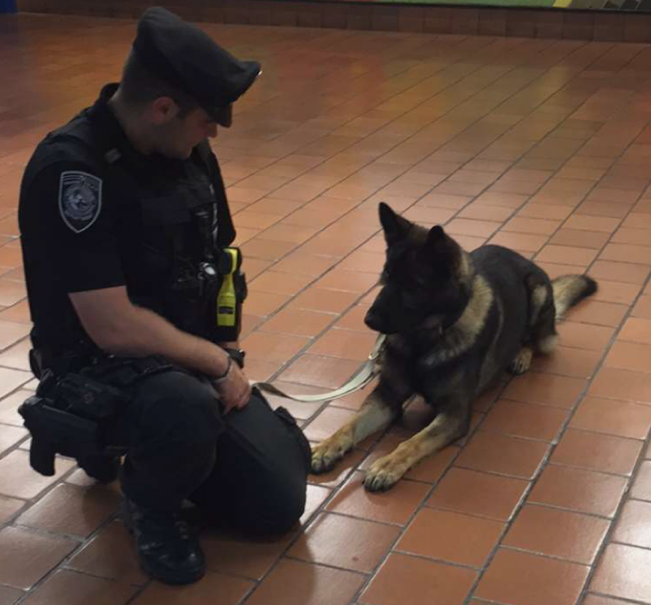 Philadelphia's newest explosives detection dog, Quest, started his first day on the job with a jubilant yelp and a tug on his leash, as if he was telling his handler, "I'm ready."

"The DNC is his first big job," Donaldson told CBS News while patrolling Jefferson Station on Monday. "He's thrown right into the mix, and he's enjoying it."

With tens of thousands of people expected to travel throughout Philadelphia during the Democratic National Convention, the officer and his two-and-a-half-year-old canine companion have their work cut out for them.

"He'll get more work in this week than he probably will the next month," Donaldson. "It's a little bit more stress on him, but he's ready for it."

"We've only been with each other for a short amount of time, but the bond that we've grown so far has been really, really good," Donaldson said. "He gets really upset when there's anyone between us."

The purebred German Shepherd is the first working dog to be paired with Donaldson, a six-year veteran with SEPTA. The transit officer had to go through an eight-week training course to learn how to become a handler.

"This is my first dog in general," said Donaldson, adding that he's an animal lover. "I was told, 'Here's a dog,' and, 'You're going to learn about dogs, very quickly.'"

With Quest, it was an easy transition. The large dog is basically a human, Donaldson joked.

When he comes to work, he wants to work; but once he gets home, he "doesn't want to think about work."

So far, he's loving his new partner -- both on and off the job.

"He's just like having a human partner," Donaldson said. "He's a dog, you just have to take care of him."