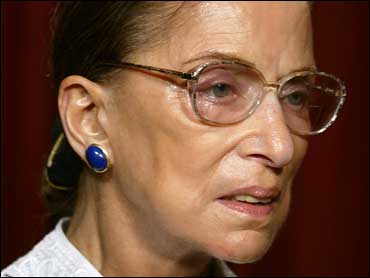 Supreme Court Justice Ruth Bader Ginsburg plans to be back at work for the court's next public session, less than three weeks after surgery for pancreatic cancer.

Ginsburg intends to be in court when the justices hear arguments on Feb. 23, Supreme Court spokeswoman Kathy Arberg said Friday.

The 75-year-old justice is currently recuperating at a New York hospital after undergoing surgery on Thursday. Arberg had no other information on Ginsburg's condition.

Ginsburg has been on the court more than 15 years and is its only woman.

Her illness raises the possibility that one of the ideologically divided court's leading liberals might have to curtail her work or even step down before she had planned. Pancreatic cancer is often deadly.

The diminutive justice underwent surgery for colon cancer in 1999, followed by chemotherapy and radiation, without missing a day on the bench.

Looking back on her first fight with what she called "a dreadful disease," Ginsburg said her treatment was arduous. But having a job to turn to was a great benefit.

Ginsburg credited the late Chief Justice William Rehnquist, who died of thyroid cancer in 2005, with helping her through a difficult period.

"He kept my assignments light during the most trying weeks and he let me decide what I could tackle," Ginsburg said in 2005 at a conference on Rehnquist's legacy.

Ginsburg's plan for a quick return to work hinges on avoiding complications following surgery. Anywhere from 20 percent to 40 percent of patients encounter complications, depending on the type of pancreatic surgery, said Dr. Michael B. Farnell, chairman of the gastroenterologic and general surgery division at the Mayo Clinic in Rochester, Minn.

Leakage of pancreatic fluid, which could cause an infection, is among the most common problems, Farnell said.

For now, Ginsburg will remain in the Memorial Sloan-Kettering Cancer Center in New York for seven to 10 days, said her surgeon, Dr. Murray Brennan, according to the court.

If Ginsburg or another justice leaves the court, it would fall to Obama to pick a successor. Anyone he might select to replace her probably would be as liberal as she, if not more so, keeping in place the 5-4 conservative tilt of the court.

The new cancer was discovered during a routine, annual exam late last month at the National Institutes of Health in Bethesda, Md. A CT scan revealed a tumor measuring about 1 centimeter across at the center of the pancreas, the court said.

The court offered few details about the operation or her anticipated course of treatment.

Pancreatic cancer is one of the most deadly cancers. Nearly 38,000 cases a year are diagnosed and overall less than 5 percent of patients survive five years.

In more than 90 percent of those cases, the cancer isn't found until it has already begun spreading through the abdomen and beyond. Early pancreatic cancer produces few symptoms other than vague indigestion.

But when it is diagnosed at an early stage, as appears to be the case with Ginsburg, survival rates go up. The American Cancer Society estimates that 20 percent to 24 percent of patients whose pancreatic cancer is caught early survive five years.

Ginsburg's prognosis depends on a number of factors, including whether the tumor, despite its small size, had begun spreading to the lymph nodes, and what specific type it is. Most are aggressive, although a small proportion of patients have what Dr. John Marshall, a pancreatic cancer specialist at Georgetown University Hospital, calls "quieter ones."

"We want to be in that early group so we can have the surgery and have a potential chance at cure, but it is a big operation and a disease that does tend to spread even very early," he cautioned.