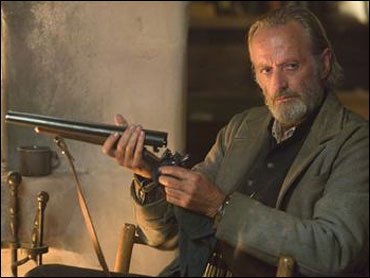 Bandit Russell Crowe and posse volunteer Christian Bale wage a war of wills on the trail in "3:10 to Yuma." Outlaw Brad Pitt is done in by starry-eyed admirer Casey Affleck in "The Assassination of Jesse James by the Coward Robert Ford."

The venerable Western rides again after falling out of favor in a film industry where horses, quick-draw gunfights and saloons with swinging doors seem like quaint relics.

Pitt, who stars as the mythic James, takes issue with the term Western, though.

"I'm very hesitant to call this a Western, because it's more of a psychological drama, a psychotic breakdown, than anything. Which is probably a harder sell than a Western," said Pitt, who plays James as a man succumbing to paranoia as he suspects old accomplices of betrayal.

The Western once seemed as plentiful on the big-screen as buffalo on the 19th century plains. Now the genre is as scarce as a tumbleweed on the Hollywood Walk of Fame.

James Mangold, director of "3:10 to Yuma," a remake of the 1957 Glenn Ford-Van Heflin tale about a poor rancher who hires on to help escort a captured felon, said the term Western nowadays has a negative ring to it.

"The simplicity of that is rarely found in Westerns, at least the good ones. It's usually a lot of gray hats, with a very charming villain and a very flawed hero, and a lot of spaces in between," Mangold said.

"That to me is part of the public-relations problems the Western has, is that people view it almost as what you'd see when you go to one of those Knott's Berry Farm stunt shows. Something silly and nostalgic, with a blacksmith and men rolling off tin roofs into a trough. When in fact, the Western is emblematic of something so much richer to me, which is a kind of fever dream of American anxiety and violence and loathing, self-loathing. ...

" 'Shane': A killer comes to visit and protects a good family from another killer. I mean, what could be more sophisticated or dark and interesting than that?"

From the 1930s through the '60s, legendary actors such as John Wayne, ("The Searchers," "Stagecoach"), James Stewart ("Destry Rides Again," "Shenandoah"), Gary Cooper ("High Noon," "The Westerner") and Henry Fonda ("My Darling Clementine," "Fort Apache") made Westerns one of their specialties.

Studios churned Westerns out by the dozen, with major directors led by John Ford continually returning to the genre.

A new breed of bloody Old West tale emerged in the 1960s and '70s with the Spaghetti Westerns of Sergio Leone and others and films by such directors as Sam Peckinpah.

Over the next 20 years, Leone's star Clint Eastwood, who rose to fame on the TV Western "Rawhide," almost single-handedly kept the Western alive with such films as "High Plains Drifter," "The Outlaw Josey Wales" and his masterpiece of the genre, the 1992 Academy Award best-picture winner "Unforgiven."

Kevin Costner delivered a best-picture win for the Western two years earlier for "Dances With Wolves" and went on to smaller success with the genre on 2003's "Open Range," in which he co-starred with Robert Duvall.

Duvall and Tommy Lee Jones starred in the acclaimed 1980s TV Western miniseries "Lonesome Dove," but beyond those few instances, most attempts at reviving the genre fell flat, including Ron Howard's "The Missing," also starring Jones, and the battle epic "The Alamo."

Filmmakers and actors say audiences still will turn out for Westerns. The problem, they say, is that most recent ones have been bad.

"I think I pretty much killed the Western," said Will Smith, whose 1999 Old West action comedy "Wild Wild West" took a harsh drubbing from critics. "I pretty much took the Western down for a little while."

"Two generations ago, you had a grandfather who could almost remember the Old West. Now I think as it gets farther and farther away from that era, kids just have no memory or recollection or any knowledge of it," Smith said.

Yet Jones said Westerns did not die off because they grew outdated but because too many bad ones were made.

"Those things in the '30s and '40s were easy to make. They were cheap, and people went to see them, and a lot of bad ones were made. Very bad ones, preying on sentimentality, I suppose, for the bored, settled American longing for the realization of Manifest Destiny," Jones said.

"I watched 'High Noon' two nights ago. I've got to tell you, it's a third-rate movie, in my view, that is rendered unforgettable by Cooper's performance," Jones said.

The genre has earned some good will on the small screen lately thanks to the acclaimed Western series "Deadwood" and the movie "Bury My Heart at Wounded Knee."

"Assassination of Jesse James" director Andrew Dominik is not a big fan of Westerns but does like the setting they offer for storytellers.

"It's a great period of history, that period of western expansion, the Civil War," Dominik said. "It's pretty extraordinary the way people lived, and it's not often portrayed accurately in cinema."

Part of the demise of the Western certainly has to be attributed to the lack of iconic actors taking up the reins in the genre. Other than Eastwood, modern Hollywood produced no heroes riding high in the saddle on the order of Wayne, Stewart, Cooper or Fonda.

"3:10 to Yuma" co-star Peter Fonda, Henry Fonda's son, cited the sheer moral compass his father presented at the end of "The Ox-Bow Incident," when he shames a lynch mob by reading a heartbreaking letter written by a wrongly hanged man to his wife.

"They all have to turn away, because suddenly, all of their white hats turn black, and they cannot get away from Henry Fonda's character, that incredible almost monotone cadence from Grand Island, Neb.," Fonda said. "You cannot beat it."