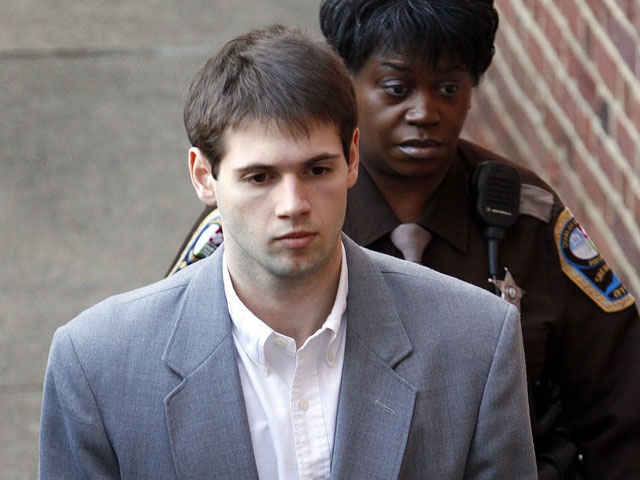 (CBS/AP) CHARLOTTESVILLE, Va. - The jury that convicted George Huguely of second-degree murder in the death of his ex-girlfriend Yeardley Love recommended the former UVA lacrosse player be sentenced to 25 years in prison for her death, plus one year for grand larceny.

The maximum prison term for second-degree murder is 40 years. Huguely could have received a life term if he had been convicted of first-degree murder.

Circuit Judge Edward Hogshire set an April court date for sentencing matters before the formal sentencing which is expected to be held in the summer. He is not bound by the jury's recommendations but Virginia judges typically heed jurors' wishes.

Huguely was found not guilty of four other charges, including breaking and entering and burglary.  The jury of seven men and five women considered testimony from nearly 60 witnesses over nine days. They had to decide whether Huguely battered Love to death in a jealous outburst or if his intent to talk with her spiraled out of control and she died accidentally.

"We dread looking back on the events of May 3, 2010 and pray for the strength to get through each day. Time has not made us miss Yeardley any less, in fact quite the opposite...We'd like to thank everyone for their kindness and respect of our privacy during such a difficult time."

The jury deliberated for nine hours before announcing their verdict late Wednesday afternoon.

As the verdict was read, Huguely appeared stoic, standing straight and wearing an poorly fitted jacket.

Huguely killed Love after a day of golfing and binge drinking. The prosecution said that he was upset about a relationship she had with a North Carolina lacrosse player. Love's right eye was bashed in and she was hit with such power that her brain was bruised. She also had a wrenching head injury that caused bleeding at the base of her brain stem. A coroner concluded she died of blunt force trauma.

Jurors heard testimony from lacrosse players who told of Huguely's escalating drinking problem and the public arguments between the two. The incidents included Huguely putting Love in a chokehold while on his bed and one in which Love accused him of flirting with two high school girls.

Friends and fellow players said the two were unfaithful to each other and had a stormy relationship.

In a police interrogation video - which jurors requested to view during deliberations - Huguely acknowledged he may have shaken her but insisted he didn't grab her neck or punch her.

The prosecution said Huguely went to Love's apartment less than one week after he sent her a threatening email about her relationship with a North Carolina lacrosse player. In the email, Huguely wrote that when he found out about the relationship, "I should have killed you."

In his closing arguments, Huguely's attorney described him as a hulking, hard-drinking jock but no killer. He acknowledged Huguely had an unintended, accidental role in Love's death, and that the jury should find him guilty of involuntary manslaughter, if anything. He suggested their behavior was the norm in the "lacrosse ghetto" at the University of Virginia.

Last year, Virgina's General Assembly passed a law that expanded criteria under which people can seek protective orders. The measure allows people in dating relationships or those who face threatening co-workers to more easily obtain such an order.

"Yeardley Love's death resulted in a great awakening for many individuals in Virginia and across the country about the danger that exists in violent dating relationships," Kristi VanAudenhove of the Virginia Sexual and Domestic Violence Action Alliance said in a statement.

"It has also sparked conversations at colleges and universities about how to improve policies and services for students experiencing sexual and domestic violence," added VanAudenhove.