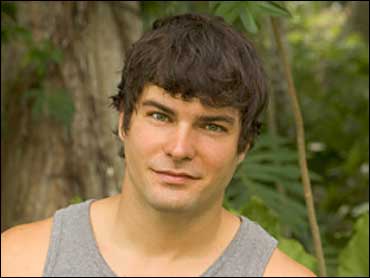 Former pro quarterback Gary Hogeboom was reduced to tears in the Mayan jungle after viewing a videotape of his wife and kids. But the man who's had a target on his back wasn't weeping at the end.

There were hints that Jamie had worn out his welcome. His jungle-induced belligerence was starting to grate on his tribe mates.

"He doesn't even think when he starts an argument," Cindy said.

"Emotionally, this game might be taking a toll on him," Judd said. "Psychologically, he's losing it."

With Jamie leaving himself vulnerable, Gary made his move at the first challenge. He, Judd, Stephenie and Danni won a mud-filled obstacle race and with it, a helicopter trip to a swanky private home. It would be a pajama pool party with gourmet food, Folgers coffee, and videotapes from home.

Judd got a message from his wife, Danni from her dog, and Stephenie from her nieces.

Gary wept like a baby upon seeing his wife and kids send their well wishes. "I'm an emotional wreck anyway," he said, rubbing his eyes.

But Gary is also a "smooth operator" as Stephenie would observe later. The emotional quarterback took the opportunity to bond with his tribe mates, charming them with his integrity and challenging them to keep the most deserving people in the jungle.

The pitch seemed to work. Sort of.

"Sometimes this game affects your heart," Judd said. "But if I want to go further in this game, the threat's gotta go."

Even Gary conceded his plan was tenuous. "I don't know if it's too late but I made the pitch to them," he said. "If I don't win immunity and it doesn't change, then I'll be gone."

And when Gary was edged out by Cindy in the first round of the immunity challenge, it seemed like he was destined to be gone.

But Jamie made the mistake of not keeping quiet. Delirious and paranoid, he continued harassing his tribe mates about not voting him off.

"It's ridiculous and it's getting old," said Cindy.

"You're driving me insane," Rafe complained in private.

At tribal council, Jamie himself admitted to his irrational behavior: "When you're out in this jungle, you can go insane."

Insane, maybe, but still confident. After all, the Alliance Of Six had a deal. Gary was getting booted.

"Blindsided!" he screamed with a wild look in his eye. "Now that's how you vote somebody out!"

Jamie will be clear-headed when he appears on The Early Show Friday morning, sharing what really went on in the game for a million dollars. Plus don't forget a secret scene will be revealed exclusively on The Early Show.
By Stephen Smith

The Guy In The 'Clubhouse'