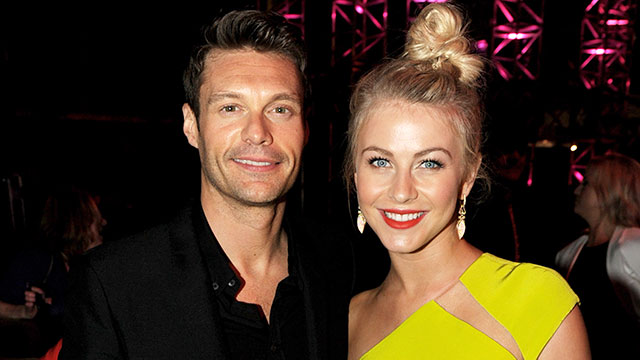 (ETonline) Though there's no sign of love handles, Julianne Hough admits to InStyle Makeover magazine that she's packed on the pounds since first getting together with beau Ryan Seacrest.

"I'm 20 lbs. heavier than I was when we started dating," the 24-year-old cover girl confesses. "And now we always have great wine, and I can tell the difference. So I told him, 'You ruined my life because I can't go to a friend's house and drink cheap wine anymore.'"

Hough and Seacrest, 37, were first spotted together in 2007, but the former Dancing with the Stars pro says she was initially apprehensive about dating the uber-successful American Idol host. "I was reluctant because he is such an influential guy, and what if it didn't work out? ... Our first date, I was so nervous that I just sat there and interviewed him with questions like, 'Are you loyal?' and 'Are you close to your family?'"

With Hough's movie career taking off and Seacrest adding NBC Olympic commentator to his already loaded work schedule, the couple must get their affections in where they can. "When we do see each other, we are super excited and do these cute and romantic things," Hough gushes.