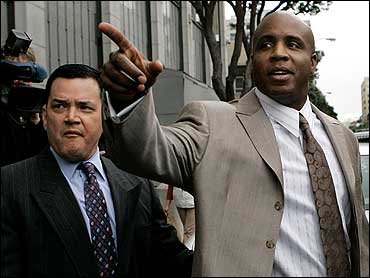 A federal judge says she might toss some of the strongest evidence against Barry Bonds, a blow to prosecutors trying to prove the home run king lied when he denied knowingly using performance-enhancing drugs.

U.S. District Judge Susan Illston said her "preliminary thoughts" were to exclude from trial three 2000-2001 positive drug tests that prosecutors say belong to Bonds unless there is a direct link that the urine samples came from the former San Francisco Giants slugger.

"If there's no testimony to establish that, I don't think any of them work," Illston said.

The only person who can do that seems to be Bonds' personal trainer, Greg Anderson, who spent more than a year behind bars for refusing to speak to a federal grand jury investigating Bonds. And Anderson's attorney, Mark Geragos, has said his client will not testify against Bonds at the trial, scheduled to start March 2.

If her preliminary thoughts stand, the government's case against Bonds will suffer a significant blow - but not a fatal one, legal analysts said.

"It hurts, but the government still has quite a bit of other evidence," Golden Gate University law professor Peter Keane said.

That includes a recorded conversation between Anderson and Bonds' former personal assistant Steve Hoskins in which they discuss injecting steroids; a conversation Illston said she's inclined to allow at trial.

Illston will issue a formal decision on the evidence discussed Thursday at a later date. She also will hold a separate hearing on whether to allow testimony from expert doctors the government hopes would persuade a jury that changes in Bonds' body were due to steroid use.

Without someone to authenticate that the test results were from Bonds' urine, Illston said claims that the tests were Bonds' were "classic hearsay."

Based on the same logic, Illston said she likely also would exclude a doping calendar and other papers seized by federal investigators at Anderson's home.

The three positive drug tests - seized during a 2003 raid of the Bay Area Laboratory Co-Operative, the headquarters of a large-scale sports doping ring - are a key part of the government's effort to prove Bonds lied when he told a grand jury that year he never knowingly took performance-enhancing drugs.

The judge and the lawyers didn't discuss a fourth positive steroids test seized in 2004 from a lab used by Major League Baseball to test its players in 2003.

The difference between that test and the three positive tests from 2000-2001 is there's no need to authenticate it.

Prosecutors said former BALCO executive James Valente is prepared to testify that Anderson handed him the three biological samples and told him they belonged to Bonds. But the judge said Valente's testimony was not enough to link the sample and Bonds.

Victor Conte, BALCO's founder, has always maintained that Bonds' biological samples were tested "down and dirty" and unreliable.

"These alleged Bonds test results and records not only lack a chain of custody and contain inaccuracies, but they also involve people with no formal training," Conte said in an e-mail Wednesday. "This causes uncertainty and creates doubt regarding the validity of this testing and record keeping evidence."

Hoskins said he made the secret clubhouse recording in front of Bonds' locker in March 2003. Hoskins said he was trying to obtain evidence to show Bonds' skeptical father Bobby Bonds, a former Major Leaguer who died of cancer in August 2003, that his son was using steroids.

Bonds' attorneys offered the judge a more sinister motivation for Hoskins to make the recording without Anderson's knowledge: blackmail. Bonds told the FBI shortly after the recording was made that Hoskins was stealing from him by forging his autograph on Bonds' memorabilia.

"He wanted to get some protection from the investigation that he knew was coming," Bonds' attorney, Dennis Riordan, said. The FBI dropped its brief investigation of Hoskins soon after without charging him with any crimes.

First indicted in November 2007, Bonds pleaded not guilty for a third time Thursday after the government revised the charges to fix legal technicalities. He now faces 10 counts of making false statements to a grand jury, plus an obstruction of justice charge.

If convicted, Bonds faces a sentence between probation and two years in prison.

The judge plans to hold a separate court hearing to determine whether the prosecution can call to the witness stand Dr. Larry Bowers, the medical director for the United States Anti-Doping Agency. Bonds' attorneys argue that the science of steroid effects is inconclusive.

Prosecutors said in court papers that Bowers "will testify that steroid users develop such symptoms as increased muscle mass, shrunken testicles, acne on the upper back, moodiness, and an erratic sexual drive."

The prosecutors said they also will call "witnesses close to Bonds who will testify that Bonds exhibited some or all of these symptoms between approximately 1998 and 2003."

Keane said that physical side effects that Bonds appears to have experienced - such as sudden head growth - is still part of the government's case.

"The main evidence against Barry is his body," Keane said. "That's the whole ballgame."

A federal judge has sentenced former National Football League player Dana Stubblefield to two years probation for lying to sports-doping investigators about his steroid use.

U.S. District Court Judge Susan Illston cited Stubblefield's later cooperation with the drug probe in declining to sentence him to three months home confinement, as recommended by federal probation officials. He turned over the names of players, agents and trainers he suspected of drug use to federal investigators and NFL officials.

Stubblefield admitted that three days after the NFL informed him he had tested positive for steroids, he denied taking them when interviewed by agents who raided the Bay Area Laboratory Co-Operative.

Stubblefield played on the defensive line for three teams from 1993-03.