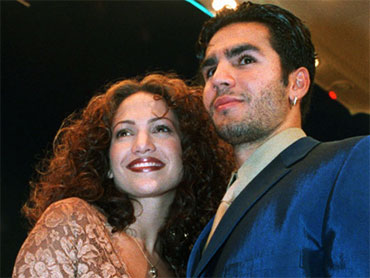 Home videos featuring Jennifer Lopez and a movie project based on them were blocked by a judge Tuesday.

Lopez sued the pair for $10 million last month, claiming Noa was trying to violate the terms of the couple's divorce and a confidentiality agreement by releasing 11 hours of footage. The injunction also covers a film project that Meyer and Noa have called a "mockumentary" about Noa's escape from Cuba and his life since then.

The injunction issued Tuesday will remain in effect until the case is resolved. Lopez's attorney, Jay Lavely, said it will now go into arbitration.

Lopez wed Noa in 1997, but their marriage lasted just 11 months.

An attorney for the singer-actress said the footage doesn't contain sexual situations.

Noa agrees, saying after Tuesday's hearing that the footage was shot when he and Lopez traveled to Cuba. He vowed to fight the case, although he didn't speak during Tuesday's hearing and wasn't represented by an attorney.

"This thing is not going to end here," Noa said, clutching an upcoming calendar of his modeling photos. "I'm not going to let them or her step all over me again."

He and Meyer said they plan to file a cross-complaint against Lopez. "We could sue her for the sky is the limit," Meyer said.

Lopez, 40, did not attend the hearing.

In 2007, she won $545,000 in damages and attorney fees in another lawsuit that blocked Noa from publishing a ghostwritten tell-all book.

In issuing the injunction, Chalfant noted that Meyer's attorney hadn't filed any opposition papers or shown why his client hadn't provided information the judge ordered to be turned over to Lopez's attorney.

Meyer had threatened in recent days to file the footage in the court case, allowing the public and reporters access to it, even if it meant time behind bars.

"If he wants to go to jail, he can go to jail," Chalfant said, noting that Meyer was "threatening to commit essentially an act of contempt of court."
By Anthony McCartney