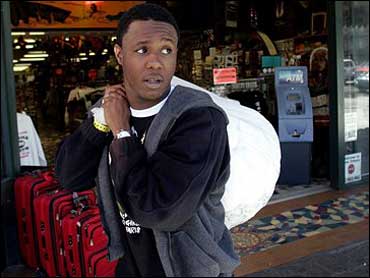 A federal judge on Monday denied a last-minute request that would have forced the federal government to continue paying directly for hotel rooms for 12,000 families made homeless by last year's hurricanes.

FEMA has promised the evacuees from hurricanes Katrina and Rita that they will still receive federal assistance that they can use toward hotel stays or fixing their ruined homes, although FEMA will no longer pay for the hotels directly after Monday.

The families made homeless by last year's hurricanes were hoping for a last-minute reprieve that would force the federal government to continue paying directly for their hotel rooms past Monday's deadline.

In a motion filed Sunday, lawyers for the evacuees say the money they'll get now won't be enough for reasonable living accommodations or for continued hotel stays.

The attorneys on Sunday delivered papers to the home of U.S. District Court Judge Stanwood Duval, asking him to grant a temporary restraining order.

"We have provided the court with statements from people showing they have not been treated fairly by FEMA," said Bill Quigley, an assistant dean of the Loyola University Law School, who filed the motion with civil rights attorney Tracie Washington.

About 10,500 families, or 88 percent, have received rent-assistance checks from FEMA, said Libby Turner, the agency's transitional housing director. The cash can be used to pay for an apartment or to continue their hotel stays. It also can be put toward fixing their ruined homes.

The motion alleged that contrary to prior orders of the court, many did not receive written notice of termination from the program before Jan. 30 or have not received trailers as promised.

"Under our reading of the judge's orders they should be allowed to stay until the beginning of March," Quigley said. "We think FEMA is just trying to clear the books and not taking a careful or compassionate look at these people."

Monday will mark the second wave of evacuees losing FEMA financing of their hotel rooms. Last week, the occupants of roughly 4,500 rooms lost FEMA funding for failing to register with the agency.

In Louisiana, officials offered shelters to those leaving the hotels — but according to FEMA, only one family needed sheltering.